Center of gravity some generalities

rbalzan79 in Education • 4 months ago (edited)

First of all my respectful greetings to the entire academic community of @Hive.blog, especially to the community of @edu-venezuela, it will always be of vital importance to be able to look at our environment in order to highlight the enormous task of both the world of science and technology and the knowledge of both transmitted to all of us thanks to the great effort of the educational field.

Our natural optical systems are constantly witnessing many phenomena that develop around us as long as they are within the spectral fraction of white light or visible to them, this time we will talk in general about one of them as is the center of gravity.

In this opportunity I will use the educational channel in order to carry out some very practical examples related to the center of gravity of certain particle systems that we can locate at home and in this way we can provide some knowledge to our students since they can do it at home.

Center of gravity of some objects around us

Everything that is on the Earth's crust is influenced by the Earth's gravitational field, where we are undoubtedly, therefore, to get out of this effect we would have to move far enough away to escape from such action, and also implementing a speed called escape velocity to break this attraction as we have achieved when we launched into outer space some useful machines such as our satellites, to name an example.

Now let us return to our point of analysis, which is related to the center of gravity, and this conceptualization is linked to the number of constituent particles of the body or object of study, since the cumulative forces parallel to each other of each of its particles will give rise to a resultant force which will express the total weight, as you can better visualize in Figure 1 below. Figure 1. Center of gravity (cg) of a particle system 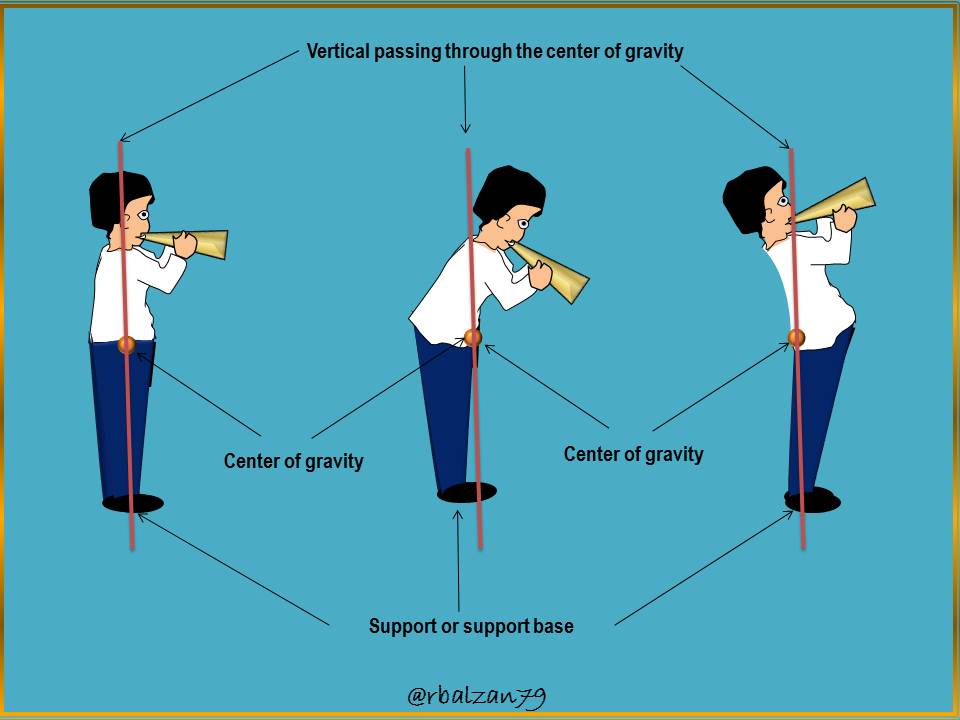 Figure 2. Center of gravity in our body

Similarly, our body is a system of particles, and therefore, in it we find the action of the center of gravity as you could verify in the previous figure 2, highlighting in this figure the elements as the line of gravity which is a vertical passing through a geometric point that represents the center of gravity, and another element of vital importance is the base of support that in our body are our feet.

To keep us standing and not fall it is necessary that the line of gravity or vertical passing through the center of gravity must be within our base of support, which in this case are our feet, otherwise we could not maintain our stability and we would fall, usually we see people playing their trumpets and perform the movements indicated above, but they must maintain the projection of its line of gravity within their feet to avoid falling.

Now we will see another practical example carried out with some domino pieces, where we will begin to build a structure with two supports or support bases (a) placing the center of gravity between both supports, and then we structure a particle system with only one support and even in this way this support manages to keep the domino pieces on it because the vertical or line of gravity passes through the center of gravity of the support as you can see in the following figure 3. Figure 3. Particle system with two and one holder

Every phenomenon that occurs in our environment has some kind of influence on us as is the case of the center of gravity since it allows us to know our balance and not fall, and also to know the balance of all those objects or bodies around us, taking into account essential elements such as the line of gravity and support bases.

In future installments we will continue to deepen in relation to other examples related to the center of gravity and the same are around us.

Note: All images were created using the Power Point application, the photographic image was captured with the camera of the Samsung Galaxy J2 Pro cell phone, the animated gif was made using Photo Scape.

The domino pieces are very useful to teach such a concept to young kids. I am however sure you know this, and have already tried it ;)

Thanks for sharing this blog with us!

Hello dear @lemouth, thank you again for taking your valuable time to visit my blog, and the blog of many other users, that is something to admire since you do an excellent job and stimulate us to continue with our work.

You are right the domino pieces are very practical for teaching some examples like the one shown of the center of gravity. Greetings to you and your family.

The pleasure of the visit was for me! :)