Alpha radiation in our body

Greetings again my dear friends of this prestigious platform especially to the friendly community of @education, to understand our existence on this planet Earth is necessary to observe our environment because there are countless phenomena that develop in it and from which we have obtained any kind of learning, and also, we have placed them in our favor and thus achieve lengthen our existence.

Undoubtedly there are many forms of manifestation or emission of energy that develops in our environment which we call radiation, therefore, a radiation is nothing more than that energy that propagates from one space-time to another and the same released in particles or in the form of electromagnetic waves and this can occur either naturally or artificially through technological applications.

Radiation can be classified or divided into two groups in relation to its effect when it comes into contact with the material with which it interacts, therefore, we have non-ionizing and ionizing radiation, being the most dangerous the ionizing ones, since when they come into contact with certain matter they lose energy and can separate electrons from the atoms that make up the tissues with which they interact.

Alpha radiation in our body

Human beings are constantly exposed to any type of radiation that originates in our environment, and such radiations can originate both naturally and artificially as already expressed, and furthermore, we have classified them according to their content or not of mass charge, therefore, we find the wonderful family of electromagnetic radiation where our fundamental white or visible light is found, and they do not contain mass when propagating from one place to another they only have energy.

We also know another type of family of radiation such as corpuscular radiation and the same differs from electromagnetic radiation as it has a mass quantity and among this family we have alpha radiation, and it consists of two protons and two neutrons, as is the nucleus of the helium atom, and this radiation is usually emitted in those atoms constituent molecules of heavy elements, for example, uranium.

In relation to the above, it is important to take into account the utmost care not to ingest any source of alpha radiation or avoid placing it on our skin because it would be very harmful to us, then we will make a relationship of penetrability of alpha rays with other types of radiation as you can see in the following figure 1. In the previous figure 1, it could be observed that the penetrability capacity of this type of corpuscular radiation (alpha) is lower than the other electromagnetic radiations, the important thing is that despite being very dangerous radiations for our body, thanks to technological advances man has been able to place these energetic manifestations to our benefit, especially in the area of medicine.

Therefore, as well as X-rays, gamma rays, alpha rays or radiation have been implemented in important medical applications such as radiotherapies of unsealed sources, whose source of generation we find radium 226, and this in order to treat certain types of cancer, such application could be observed in the following figure 2. 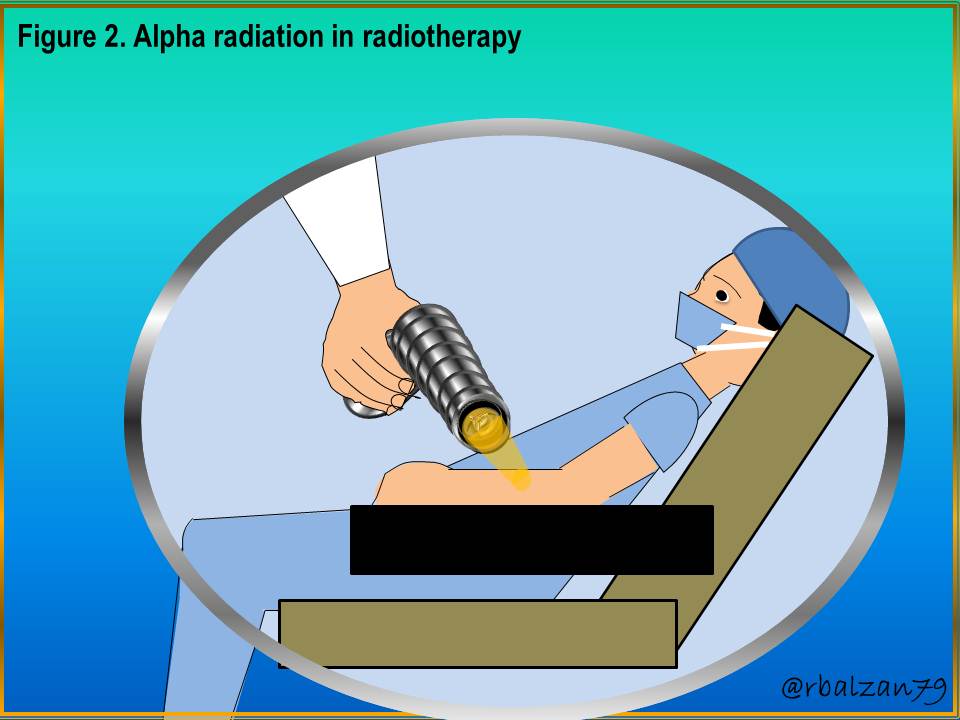 Throughout our history, man has managed to transform any type of learning obtained from our natural environment in favor of our well-being in all senses, and above all in favor of our so precious body health, as we could see in the previous examples of alpha radiation.

All this despite the fact that such radiation has the ability to ionize the matter with which it acts, however, thanks to technological advances and the dedication of the field of science these negative aspects have been placed in favor of our bodily health, but it will always be important to highlight the utmost care that each of us must have when we come into contact with this type of corpuscular radiation as is the case of rays or alpha radiation.

Until another opportunity my dear friends, as humanity we have had the enormous capacity to extract valuable learning from our environment, and all this information spread to the rest of humanity thanks to the beautiful and arduous work in the field of education.

Note: All images are my own and made in Power Poin, the animated gif was made using the PhotoScape application.