On reasoning in the same ways as Karl Popper; What was his messages through the 1900s? 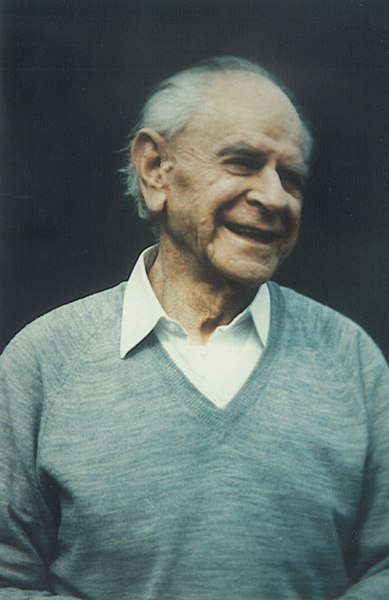 Karl Popper was an Austrian and British philosopher, and he had great effects and importances during the 1900s. And many of have gone through all his literature to examine his meanings for the world, and what was really happening in sciences.

All sciences are not in the class of heavy weight, but they are in light weight, when they are not understanding the philosophy and how things work as they are in the sciences. And we should be clever and intelligent to read and to write different things and issues, just as they are coming to us.

Karl Popper is most known for his knowledges about making things falsified, and hence if you are proving something in sciences, it can be disproved, and the only way you are calling a science for a science, is that all the statements, the hypotheses and the theories are either right or they are wrong. And if you are making a theory, you just have to collect one case of the opposite things to claim that there is a scientific theory which is reliable and has validity.

The expression with making falsification is coming from an example especially used by Karl Popper to illustrate the problem of induction as a method of proof. And his meaning is that if you have just seen white swans in the world, you think that every swan is white, but this is not correct! We have also black swans, and they are found in New Zealand and in Australia. And hence the statement “All swans are white” was falsified in Australia in 1697. When we can find the opposite tendencies and patterns when we are willing to believe, we think that the statement, the hypothesis and the theory are constituted a science, meaning we can know the nature as it really is.

Karl Popper believed that scientific knowledge is provisional – the best we can do at the moment. ... The Falsification Principle, proposed by Karl Popper, is a way of demarcating science from non-science. It suggests that for a theory to be considered scientific it must be able to be tested and conceivably proven false. Accordingly, things are being scientific if they can just be like all the instances and cases that we can find in the nature, and the nature has its variation, and variation is a good way to describe sciences, and even the Swedish professor Karl Gustav Jöreskog is doing this.

What was really the contribution to sciences made by Karl Popper? Popper was a philosopher of science, who also made contributions in epistemology, philosophy of mind and social and political philosophy. He argued that scientific theories are distinguished from non-scientific theories and pseudo-science by being falsifiable claims about the world. And professor Sigurd V. Troye by NHH in Bergen has understood the meaning of sciences: If we are just believing in something, and we have not tested the opposite cases as we believe within, the statements, the hypotheses and the theories solidify into superstition. And we can think of if there are really differences between goods and services, or that these differences are just something we have formed in our heads, and that when coming to reality, people do not mind about what calling a product, although we have institutions and organizations collected data with making patterns in theories, and there is not necessarily any foundation for it.

Karl Popper wrote a lot of books during his ways of being any human through the periods of time. And the most known books are about logic and falsification, the open society and its enemies, conjectures and refutations, all life is problem solving, and the myth of the framework, and many more interesting and exciting contributions.

Latest article, check out :
The history of music artists; The case of and the stories around Andrea Bocelli!

Accordingly, we should use theories, methods and empirical facts to examine problems, and to find solutions of problems.

While sometimes there are no other choices, this is often overcomplication in many cases. We often already know one or more solution(s) for a problem, but we often do not have the proper financial means to solve it.