Some considerations on plagiarism in the educational sector.

amestyj in Education • 2 months ago (edited)
Dear readers, it can be said that plagiarism is an immoral act when people who are fully aware of the rules to be used for the preparation of an academic article, ignore them and steal relevant information from other authors and pass it off as their own creation. Generally this type of situation is observed at the undergraduate university level, which may be premeditated or simply the student is unaware of the methodologies for the preparation of papers, research, essays, among others, all this due to insufficient information provided by the institution and the teacher. Image design by @amestyj with public domain image taken from Pixabay
In accordance with what was referred to in the previous paragraph, the production of scientific papers is vulnerable to "ethical violations" due to the diversity of thoughts in such a corrupted and distorted society; in spite of the existence of regulations for the elaboration of scientific papers and an editorial process (which also presents flaws in the system) to choose reliable articles for publication, the problem has persisted for decades. Laguna et al. (2007), in their article "Ethical considerations in the publication of scientific research" argues that this is one of the most frequent faults in the publication of scientific articles.
On the other hand, this problem is evident in educational institutions, which could be due to the lack of values that mark the identity of the human being. To avoid this type of situation, in the area of methodology there are the well-known textual and/or paraphrased quotations, where reference is made to the origin of the information, and it is complemented with our appreciation of the subject under study. 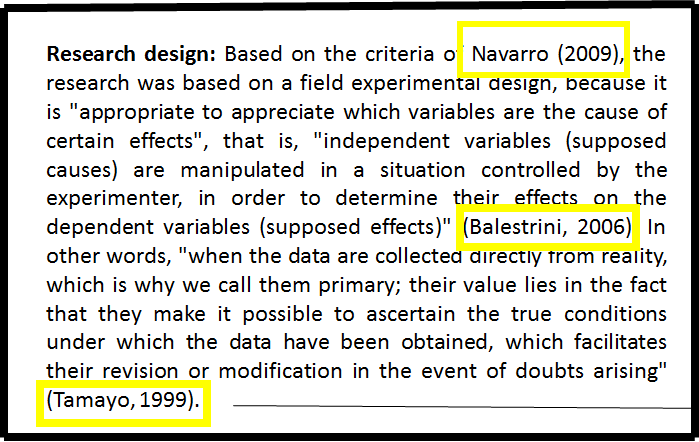 Example of bibliographic citations made by @amestyj in an experimental research.
In this sense, when reference is made to the information obtained with other authors, and our point of view is presented, an enriching discussion is generated within the article, which generates a significant learning for the reader, because different points of view obtained from scientific and empirical experience are merged. In the university environment, the professor must be a researcher, so that through the results obtained he can strengthen the theoretical knowledge that he teaches in his curricular units, in this way he will build a solid knowledge with his students and will instill the example of researching and not replicating without any scientific or empirical basis.
To avoid this type of immoral acts in universities, research lines defined in departments of degree work should be established, where the student can locate the area of knowledge with which he/she feels more affinity, likewise, methodological norms should be established according to the area of study, by complying with the above mentioned together with the orientation by the professors, the inventiveness of the students will surely increase and the duplicity of works will decrease. From my point of view, the curricular unit Research Methodology is a subject that allows us to guide our students in methodological aspects for the elaboration of scientific documents.
Dear readers, as mentioned above plagiarism sometimes occurs because of not knowing the proper scientific and academic standards, although I presume that not all the time it is due strictly to ignorance, but also to the comfort that comes with mental laziness to generate ideas, and obviously it has increased because of the ease of obtaining information on the internet. As mentioned by Timal and Sanchez (2017), the internet is not synonymous with plagiarizing, but many people take advantage of this great tool to seize valuable information without giving credit to the researcher who generates it.
Tima, S. and Sanchez, F.(2017). Plagiarism in the context of copyright. Rev. Tla-melaua vol.11
no.42. Congratulations @amestyj! You have completed the following achievement on the Hive blockchain and have been rewarded with new badge(s) :