drutter in Informationwar • 11 months ago

The natural immunity acquired by recovering from Covid lasts much longer than any protection granted by the so-called vaccines! Elite medical journal The Lancet, which was disgraced earlier this year for attempting to fraudulently cast doubt on hydroxychloroquine (HCQ), has just released a major study estimating someone with naturally-acquired immunity could become infected with Covid again within 5 years. They herald this as a victory for the "vaccines", claiming that since natural immunity might not last forever, everyone should still get the injections! We've already established that natural immunity is much stronger than protection from "vaccines", but the pro-vaxx holdouts have claimed natural immunity might be short-lived. Now we have official evidence right from the top that the "vaccines" fall short in every way! 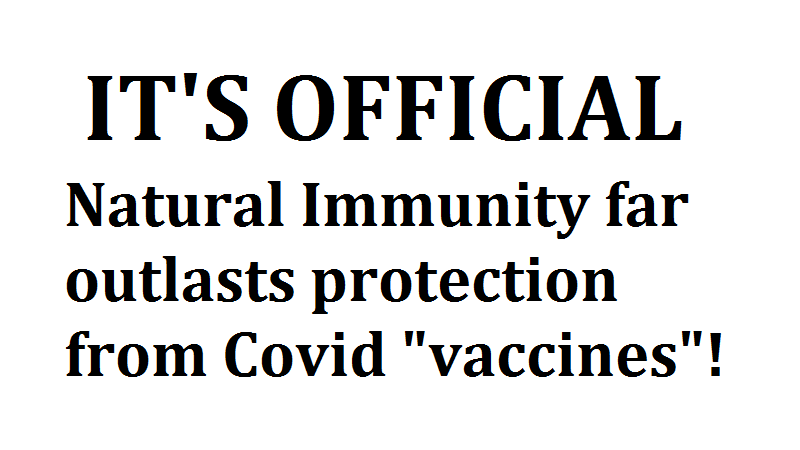 "Reinfection by Sars-CoV-2 under endemic conditions would likely occur between 3 months and 5.1 years after peak antibody response, with a median of 16 months."

"Vaccine-induced protection against infection peaks in the first month... the waning appears to accelerate after the fourth month to approximately 20%."

Disturbingly (but not surprisingly), the solution offered by the experts/scientists/officials is "persistent efforts to accelerate vaccination worldwide". It's not working, and it's risky, and it's expensive, and it doesn't last very long, but let's mandate it on everyone as quickly as possible!?! Complete madness.

These results have already been playing out in the real world. Some people who got Covid back in March 2020 are only recently just beginning to experience another infection, typically far more mild than the original illness. Meanwhile, countries that vaccinated heavily early this year are already on their 3rd shot, or "booster", to deal with a new wave of illness and death. And countries with a lot of natural immunity, like Sweden and Denmark, are not seeing any further serious waves. But now we have confirmation from the most official of sources. Natural immunity is durable and "vaccine" protection is not.

!LUV
Absolutely incredible how the report attempts to downplay its results! They found natural immunity lasts 5 years or longer, and announced with glee "it doesn't last forever!" So there's still a tiny chance the "vaccines" might be legitimate and useful? FORGET IT!

Totally called this!
You could tell it was the case, for months now. People in UK are sick and they are blaming a new flu or cold.... but now saying it might be a new sub-strain of Delta? Come on. They're sick because they vaccinated and now it's wearing off! But people with proper natural immunity are mostly still well.
!LUV for ya <3

@drutter, you've been given LUV from @hempy.

Just ask the homeless about shots. I have seen not one single story of how deadly the virus is to people living on the street. Not one. Granted I do not read the headlines or go to multiple news sites or search for stories, I do know that the Main Stream Media and Politicians love to use the homeless to further agendas.

Look at all the over crowding stories of people at the border, of all the pictures of the crowded facilities, yet no real stories about covid from them, at least none that I have seen. So street people and border crosses must have some pretty dang healthy immune systems.

I think street people have been exposed to a lot of viruses. Those that lived ended up with natural immunity, at least for some time, and were less likely to be harmed by it the next time. I remember at the start of this, fear was being ramped from every angle, and one of them was "street people are going to spread the virus like wildfire". But like you said, it didn't happen. Perhaps something similar going on in some third world areas, that were said to be ticking time bombs, but have reported almost no problems with Covid?

Good news... but will fall on deaf ears for agenda driven demons..

I have black sheep immunity.

It protects against things like stupidity , which there seems to be a lot of in the media today.

It's truly reached the "us against them" people vs government scenario.

We never wanted it, peoples complacency, lack of attention to detail, and selfish ways allowed for it. Now it's up to the ones who tried to warn them all along to pick up the pieces.