Golf questions answered - why all the dimples on the ball?

Golfing in my kitchen 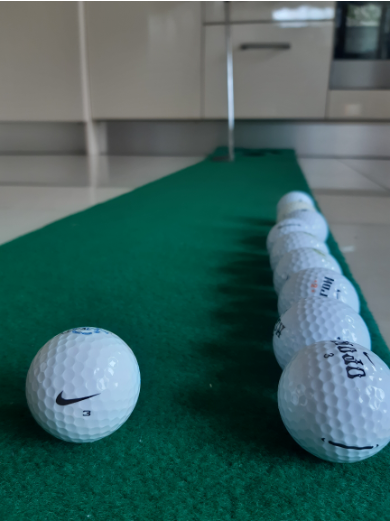 Source: my phone(this is my kitchen)

So, I was having a few practice putts on my putting matt the last day. It was one of those rare days where I wasn't busy with work, didn't have maintenance odd jobs to do around the house and the kids were not demanding my undivided attention. It was quite nice actually. Rock the shoulders and in the putts rolled in one after another. Well in fairness it's only a 6 foot putting Matt and luckily my floors have no breaks!!

Anyway, what I noticed all of a sudden was the dimples on my golf ball. I never paid them much regard to be honest, but I was curious all of a sudden.

Why are there dimples on a golf ball?

How many dimples are there?

Is there a limit to how many dimples one can have on a ball?

Were there ever golf balls without dimples?

Why don't balls in any other sport I can think of have dimples?

So I finished my putting practice. I finished it fairly quickly to be honest. My mind was now trying to figure out why a ball had dimples? My initial thinking was something to do with aerodynamics and how a ball travels through it's only impedance, the air. Actually, there is another lesser known impedance, my generally shite golf!! :)

OK, it was time for some reading. Off I went to read up on the reasoning behind the dimples and do you know something, it made really interesting reading and my hunch about aerodynamics was right. Let me try and summarise what I found out.

Experts in the golfing world study the impact between a players golf club and ball to determine what the launch conditions are during a golf swing. The initial smash of club on ball lasts a mere one two thousanth of a second, yet it dictates the velocity, launch angle, as well as the golf ball's spin. After that brief 1/2000 of a second, what the ball does next is determined exclusively by Mr Newton's laws of gravity. What this means is that golf ball design has a massive impact on what the ball will do as it travels through the air particles all around us. What I learned was that if a pro was to strike a ball with zero dimples and a smooth surface, it would only travel approximately half as far. Dimples matter. Their depth matters. Their density matters. Half as far. Wow, I would have thought maybe 15% affect, but no, closer to 50%. The science behind it is that air exerts a force on objects travelling through it. The next time you're in your car, stick your hand out the window and move it around, hand held up like a high five position and then flat like a salute and you will literally feel the difference. The high five position exerts more pressure on your hand. Aerodynamicics is basically lift and drag. Drag will try to oppose motion, whereas lift acts perpendicularly to motion. For a golf swing that equates to upward force on a golf ball.

When a golf ball is in flight, air will flow smoothly over the front of the ball and eventually separate from the ball toward the back. A moving object also leaves behind a turbulent wake region where the air flow is fluctuating or agitated, resulting in lower pressure behind it. The little cavities or dimples on a golf ball create a thin boundary of air that will effectively stick to a ball's surface. The dimples allow the air flow to follow the surface of the golf ball, all the way to the back of the ball and decrease the drag affect considerably. Therefore a dimpled ball will travel twice as far as a smooth ball, as it has half the drag. Think of your hand out the car window in a high 5 position versus a salute position. 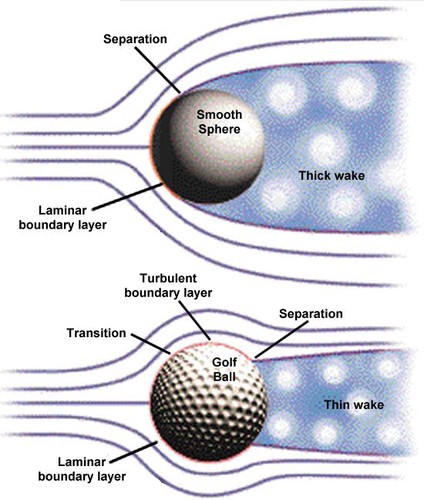 Ok, so we now understand why the ball has dimples. I also questioned the number of dimples. That can vary from 200 to 500 approximately and as far as I know 500 is the upper limit of what is allowed in competition. As for other sports having dimples on balls, i guess there are not many sports that create the same ball speed and a sliothar in hurling or a puck in ice hockey travelling any faster would not be advisable. Goalkeepers would literally die!

Well that's it from me for now.

If there is anything in the wonderful world of golf, you'd like me to discuss, do let me know in the comments below.

I knew it was to do with the airflow reducing drag but didn't realise exactly how much affect this had. Interesting and thanks for posting something different.

No problem. I'm glad you enjoyed the read and thanks for taking the time to comment.

Yes, I didn't know it had that much of an effect on distance. I knew it helped the ball carry farther and it keeps it from hooking or slicing as much (which is actually kind of scary when you think about it--I can only imagine how far my pullhooks would go with a non-dimpled ball lol) but 50% is a crazy number. We think technology is disrupting things like money, homebuilding, communications, space travel, etc... Those things have nothing on what's it's done to golf. Good post!!!

Yes indeed!! I know what mean about the pull hooks and slices! I've been known to hit balls into the next parish Eastbound or Westbound of my teeshot direction!

The technology is outrageous. I notice it in the clubs as well. I recently upgraded my Callaway Xhot driver to a Ping G410 SFT. It took a bit of getting used to, but now that i can hit it, it's a game changer! The ball is going 20 to 40 yards further for me on some drives..

Thanks for taking the time to comment and for the generous upvote.