A SHORT LOOK AT THE HYPOCHAERIS RADICATA FLOWERS

borjan in Fascinating Insects • 2 years ago

This is a collection of species and images, taken last week on the small parchment of the coastal meadow, among the yellow flowers of the plant called flatweed, cat's-ear, hairy cat's ear or false dandelion. (Enlargeable)
Hypochaeris radicata is a very common and widespread weed, native to Europe but introduced in many places, all around the temperate zone of the planet. 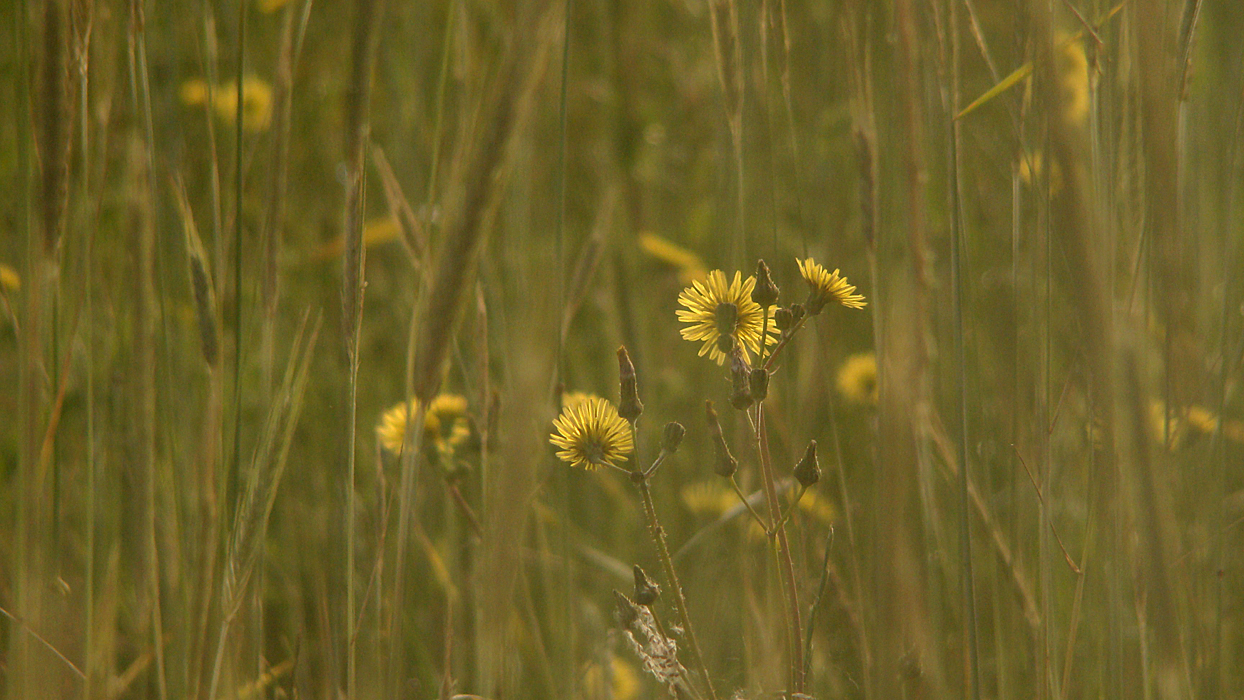 The flowers are very similar to those of Dandelion, the seeds are shaped to be carried by the wind - just like those of Dandelion ... but the overall look of the plant is different, and you can clearly see that this is not the real, common Dandelion. Flowering stems are forked and solid, with a bunch of flowers, whereas dandelions possess single stems that are hollow and of course, carry just one flower. (Enlargeable)
While walking along the small road surrounded by meadows, that are on their peak of flower production in this period, I noticed an especially varied insect life around these flowers.
It was a very short excursion on the way home from the city, I had a lot to do that day, so what you'll see in the post is only a small part of what I encountered on and around these flowers. On the photograph above is a small nymph of a cricket. If the nymph survives long enough, will grow to be a pretty large insect as an adult. (Enlargeable)
There were bees and bumblebees. Quite a few species. I caught on photograph this very small bee, much smaller than domestic honey bees ... 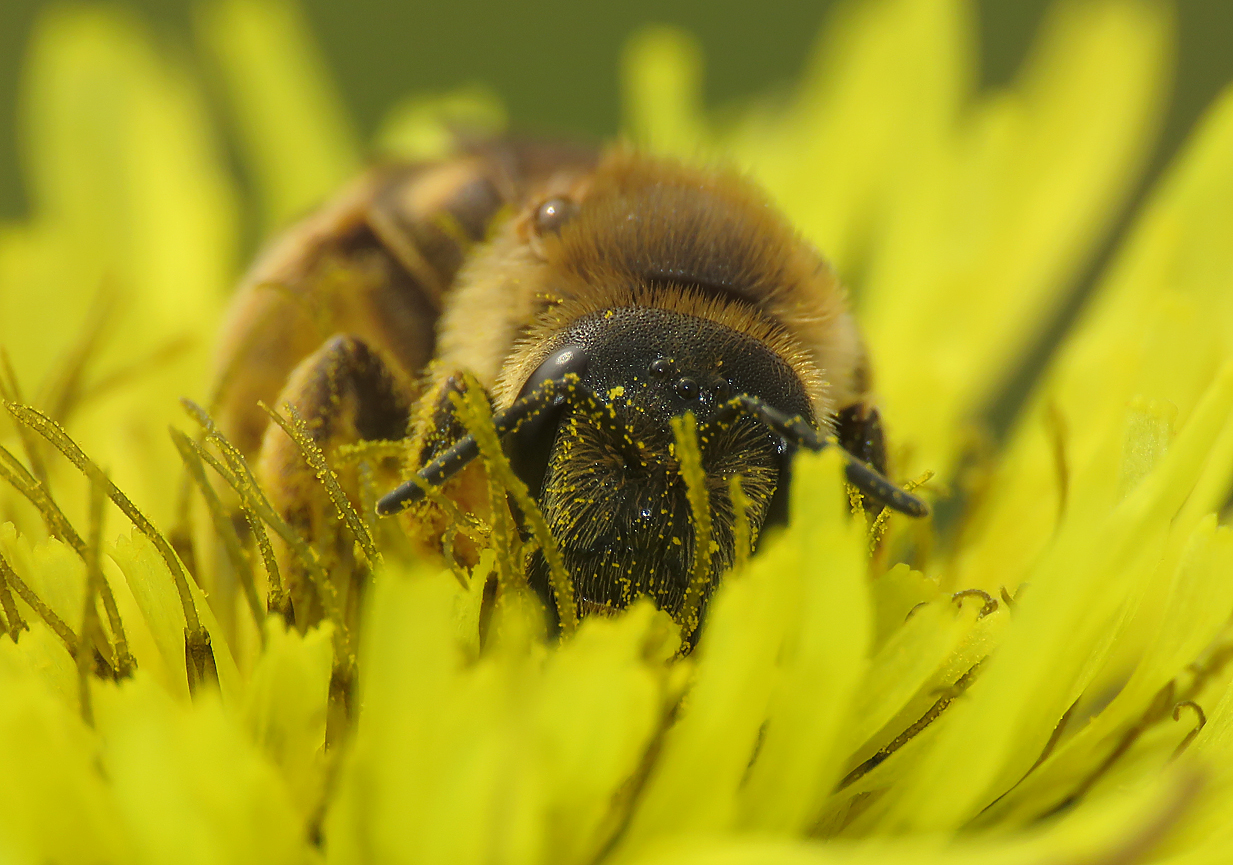 (Enlargeable)
... considerably larger one. Approximately the size of the domestic bee, maybe a bit larger, and definitely more robust. (Enlargeable)
These tiny beetles were very numerous, almost every flower had one. 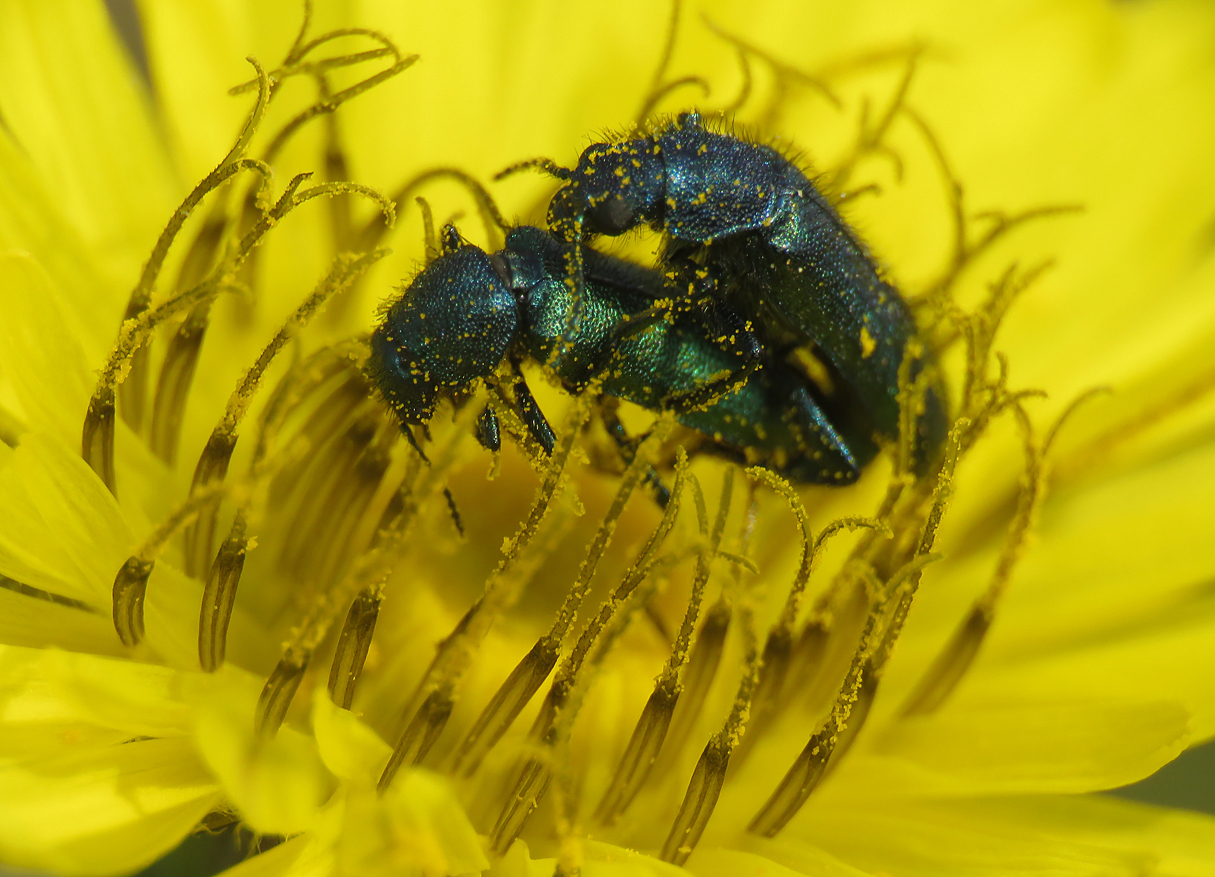 Some of them were mating. These are the Psilothrix viridicoerulea beetles. They feed on pollen. (Enlargeable)
Under one of these flowers ... 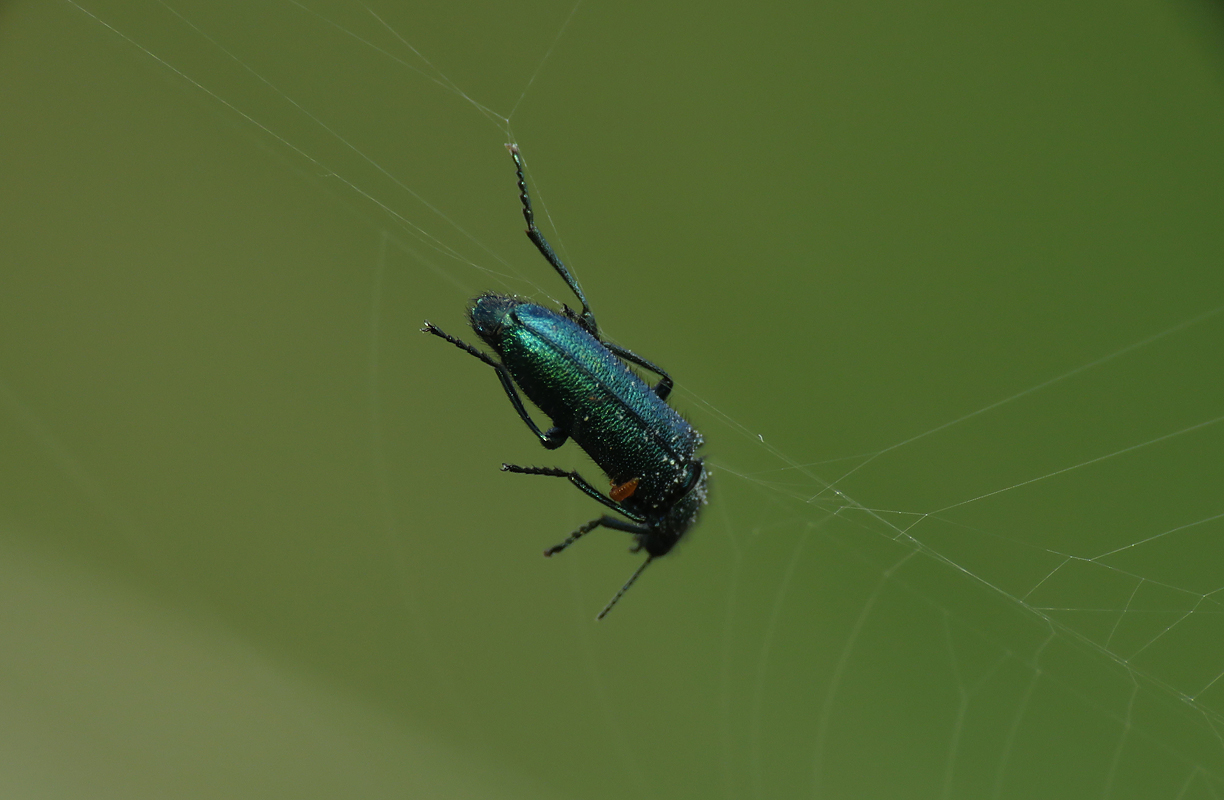 ... I saw the Psilothrix viridicoerulea caught in a small web made of very thin, almost invisible threads. It looked dead. Wasn't moving. (Enlargeable)
But when the spider started to approach, the beetle looked resuscitated. An interesting detail that I didn't notice while photographing but only later on the PC, there is some small orange larvae ... or some kind of rove beetle ... on the Psilothrix viridicoerulea ... I don't know what species is this ... maybe a parasite ... or something else. 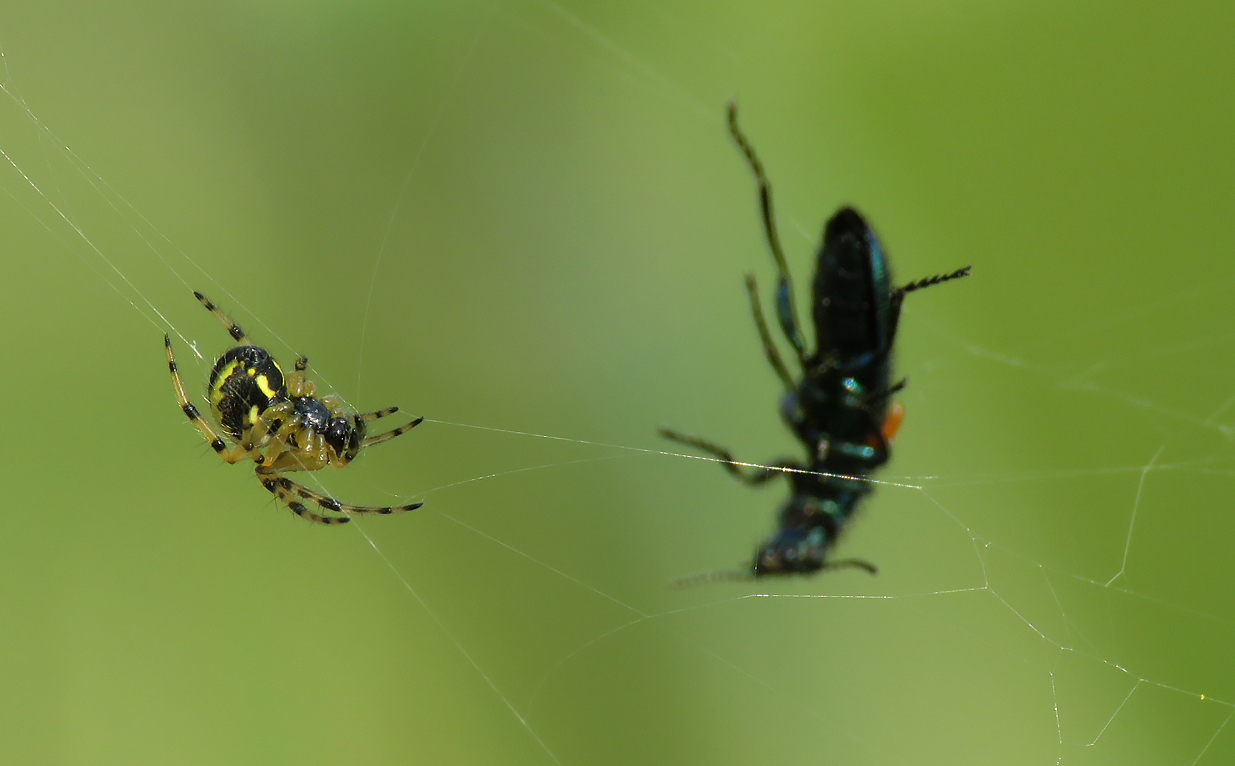 The spider was very small ... (Enlargeable)
Maybe you can see him better on this enlargeable picture. (Enlargeable)
He didn't attack ... and soon the beetle got out of the trap. And now ... 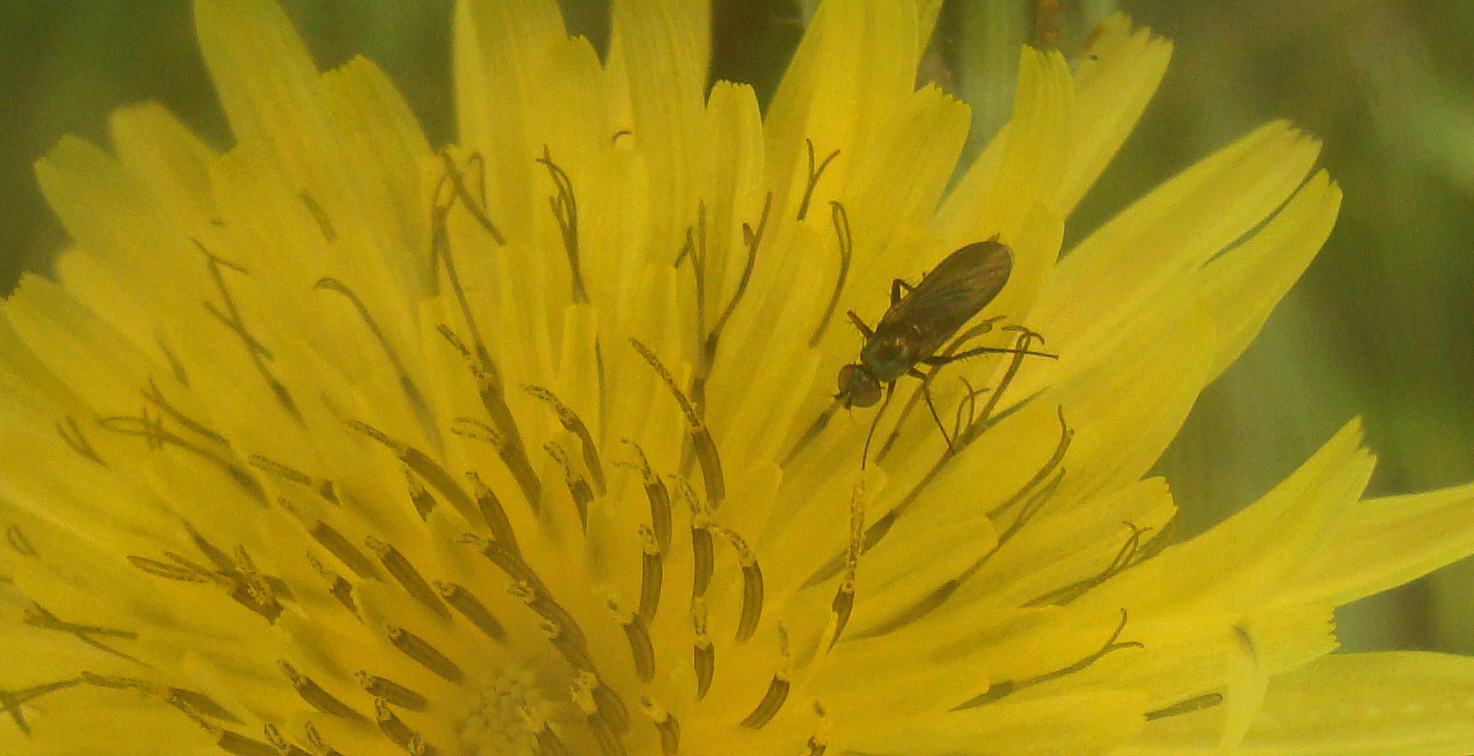 (Enlargeable)
... and the enlargeable look at the flowers ... is time to end the post ... as always here on HIVE, the photographs are my work - THE END. 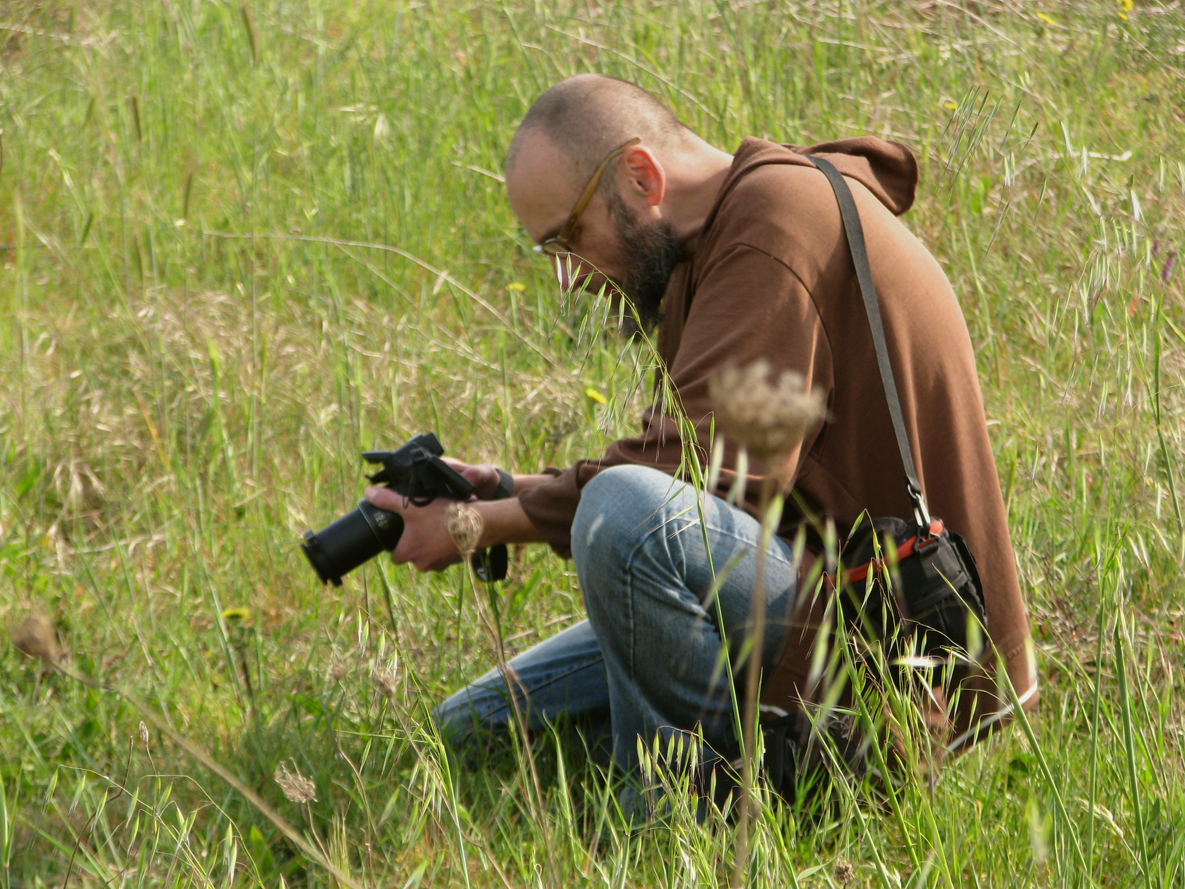 ... is time for some behind the scenes shots taken by a friend. Here I noticed that cool stuff are happening around the yellow flowers ... 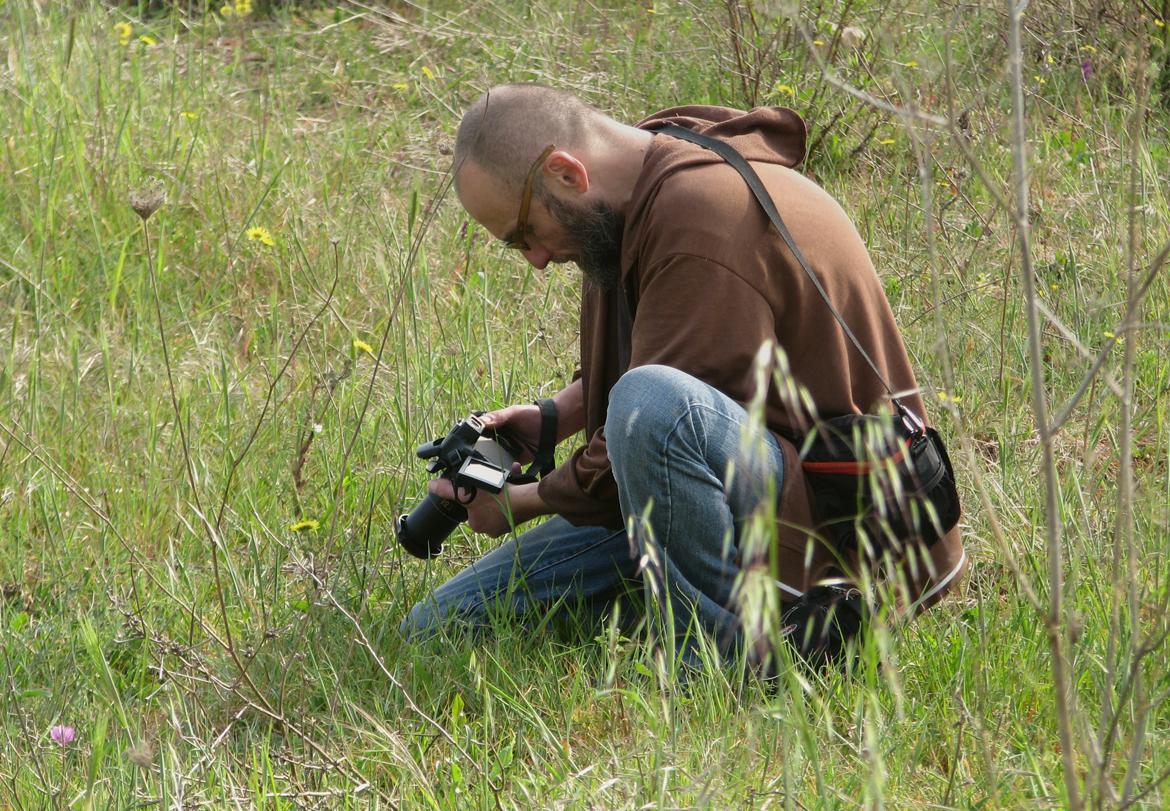 ... and here I'm prepared to catch some images.

Very nice images of these small insects. I wonder how you could see these insects hidden in tiny flowers! It’s just like a different dimension of reality.
That camera must have a very powerful lens too.

A nice evening to be among tiny nature world.

True, it's a bit like entering another dimension .... the camera has one powerful but very small lightweight lens adapter on the end of the lens. I can easily put it on camera or put it away when photographing other stuff from the usual dimension. I discovered that piece of equipment last summer on internet, an is the best thing for macro I ever had.

Wow!! This is interesting. You could make a tutorial about taking macro with this adapter! Would be so useful for others too.

But I want to enroll in your drawing class!

Thanks for contributing this great article!

How many harmful insects! We poison many of these species! Since they destroy various cultivated plants)
The walk is wonderful as always, and the pictures are full of colors and life!)