Modern Medicine is not a science, it is a religion.

active-truth in #health • 7 months ago (edited) 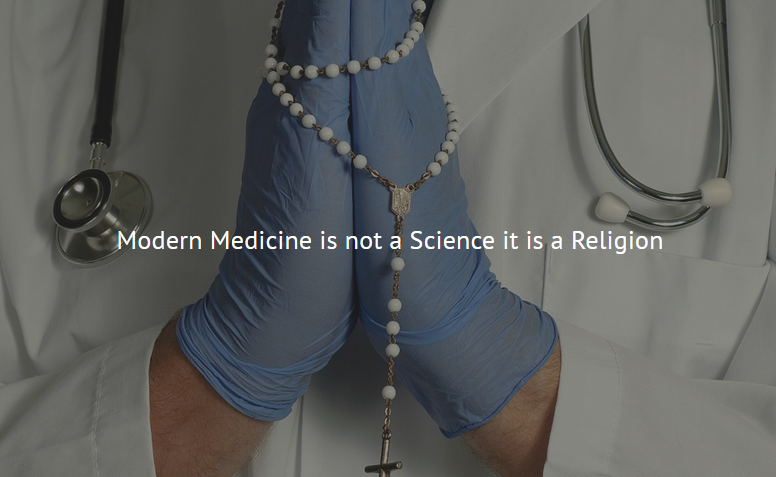 (I wrote this about 5 years ago on facebook but they deleted it so I copied it to some other platforms and had to go look for it. I think this was my first article. Just watched a video called Covidanity Unfolding by Thomas Sheridan which reminded me about this.)

All through history new ideas in medicine have been met with disbelief and horror. People working in the field who discover new ideas that threaten the dogma are treated with scorn at least and outright violence at worst.
Take Semmelweis as a classic example. He worked in a hospital where many women were dying in childbirth. After much thought and some research he decided something was linked between the cadavers and the mothers namely people were working on both, switching from one to the other. He introduced (shock/horror) HANDWASHING, in other words, basic hygiene before insertion into the body. Death rates plummeted but nevertheless he was kicked out and even then hounded to insanity and death in an asylum. He is now considered the pioneer of asepsis in obstetrics. Poor sod.
UPDATE: It has been pointed out that the case of Semmelweis only proves that germs were causing death so I must now point out that deadly chemicals like formaldehyde were used to preserve cadavers. It is this and other noxious chemicals which were ‘washed off’ before touching women in labour. This exerpt explains well how hygeine protects from chemical ‘infections’. https://archive.org/details/cu31924050126543/page/n551/mode/2up

Then there is Bechamp a better qualified contemporary of Pasteur who simply disappears from history even tho his theories were far superior and better thought out. Lauded in his day and deleted from the future.
Read about Bechamp’s findings here:http://www.pnf.org/compendium/Antoine_Bechamp.pdf

It goes right back to the inquisition when herbalists and other natural healers were deemed to be working with the devil, tortured and murdered horribly.
Not much has changed to this day. When any new ideas come along which threaten the status quo and dogma in modern medicine (allopathy) they are shot down sometimes literally!! Up to today and in the last year roughly 56 holistic practitioners have died and disappeared under mysterious circumstances. http://www.trueactivist.com/50-holistic-doctors-have-mysteriously-died-in-the-last-year-but-what’s-being-done-
The Queen's Table: Sage Advice: From "A Short History Of ...

Doctors today are not taught to think, just to do, hence we have been thrown back into the dark ages when the church ran the medical system.
Andrew Wakefield although never ever saying he was anti-vaccine to this day is still treated like a pariah, was struck off for discovering a link between Autism and bowel damage presented to him by parents who mentioned a vaccine. His crime? Daring to think.
In Germany a working Doctor of allopathy (Dr Hamer) discovered new evidence of how disease occurs and the link to the brain. His research was all done empirically (scientifically and on humans not animals or test tubes). His discovery threatens the very basis of allopathic medicine namely the germ theory and the theory of contagion. He has been kicked out, just as others were and even imprisoned but his work is so important that it must not be ignored. German New Medicine is now in the midst of the same Pasteur/Beauchamp debacle whereby people are publishing bastardized versions of the GNM theory with Hamer trapped in purgatory unable to do much besides sue for copyright and watch as the charlatans fail to heal thus discrediting his work.
Suppression of any new idea is ominous, it means modern medicine is a religion and a dogma and not a science at all. It is in fact a fraud and must be exposed.

Dr Stefan Lanka trained in micro biology and virology is trying to do just that along with another award winning virologist Dr Deusberg and investigative journalist Jon Rappaport amongst others. http://exopolitics.blogs.com/ebolagate/2015/03/there-is-no-evidence-that-the-medically-relevant-viruses-even-exist.html
Fear is allopathy’s only weapon, fear of germs/viruses and fear of death from disease symptoms allegedly caused by them. Although this is their biggest weapon the monster has no teeth. The germ theory has never been scientifically proven to this day. It was based on hypothesis before the tiny things could be seen but when the hypothesis did not hold up (as in the case of tuberculosis) they simply transferred the blame to an even smaller entity which still could not be seen, the virus. The father of microbiology, Koch, set rules for proving bacteria etc cause disease. They are called Koch’s postulates and they are very simple and still hold today yet they are not adhered to as they have always defeated any attempt to prove contagion. Still today they have not been able to isolate these tiny bogeymen viruses nor prove they cause any disease using their own scientific law.

As these simple rules defeated the germ theory so absolutely, instead of rethinking the theory Fredricks and Relman just rewrote, or rather circumnavigated and innihilated the laws and worked around the obvious farce. So virology was born. If you want to read these farcical new laws/guidelines you are welcome to fry your brain on them. http://www.virology.ws/2010/01/22/kochs-postulates-in-the-21st-century/
This cover-up which most people have never heard of could be the unveiling of the greatest scam committed on human society in all our history. Rockefeller who built the enormous empire of the allopathic medical system we know today and it’s ugly sister the pharmaceutical business is doing all in his power to hush this up and ban anything which is not patentable through all his channels of politics, education, internet and media. It’s up to us to learn about it, talk about it and start healing ourselves. Taking the power from the monster is easy, just stop feeding it by using their poisonous products or running crying to them every time you get a sniffle or a fever. Learn about how we really get sick from Beauchamp. His work is being revived and spread across the internet.
http://tuberose.com/Germ_Theory.html

Learn how to help the body through the healing process and not fear the symptoms by signing up to Jayne Donegan’s excellent articles. http://www.informedparent.co.uk/newsletter
Join or start your own local Arnica group http://arnica.org.uk/arnica-groups

When the medicine is so bad that they have to literally force it on us with new laws and powers you know it is time to do something. It is already too late!!
Learn as much as you can while you still can.

“Despite the tendency of doctors to call modern medicine an ‘inexact science’, it is more accurate to say there is practically no science in modern medicine at all. Almost everything doctors do is based on a conjecture, a guess, a clinical impression, a whim, a hope, a wish, an opinion or a belief. In short, everything they do is based on anything but solid scientific evidence. Thus, medicine is not a science at all, but a belief system. Beliefs are held by every religion, including the Religion of Modern Medicine.”
Robert Mendelsohn MD Preface by Hans Ruesch to 1000 Doctors (and many more) Against Vivisection

PS. Great talk about dogma in science. If only all scientists were like this.

Further reading: While researching to find the original pic I had for the header on this I found this article on similar lines by Vernon Coleman. Worth a look: http://www.healingcancernaturally.com/modern-medicine-is-no-science.html

Learn about natural hygiene (which has nothing to do with killing germs as we are led to believe) – https://www.healthpromoting.com/learning-center/article-learning-centers/natural-hygiene-science-health