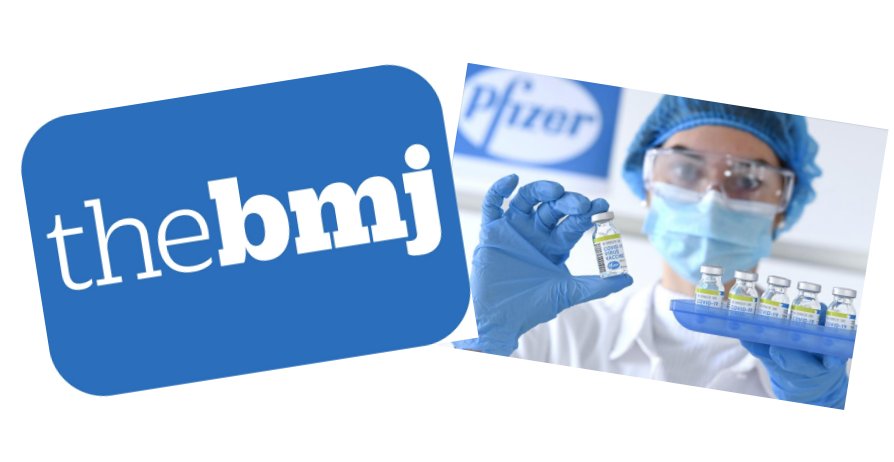 As recently reported by ZeroHedge and The Epoch Times:

BMJ, a weekly peer-reviewed medical trade journal published by the trade union the British Medical Association, called for the release of the data in an editorial published on Wednesday.

Firstly, we need to consider the authors of this particular publication entitled Covid-19 vaccines and treatments: we must have raw data, now (published 19 January 2022). Who are they? Well, they are none other than Peter Doshi, senior editor, Fiona Godlee, former editor in chief, Kamran Abbasi, editor in chief. These are the top editors of the British Medical Journal (BMJ), a weekly peer-reviewed medical trade journal published by the trade union the British Medical Association. And The Epoch Times further notes:

"Editorial freedom" is key, as medical associations around the world (such as the CDC in the US, for instance) are often not free of the influence of Big Pharma when recommending drugs, vaccines, and treatments in their respective jurisdictions.

So, to view such an article that has been produced by a publication as respected and prestigious as the BMJ will definitely carry a lot of weight in the medical community.

It is further interesting to note that the timing of this article coincides with the recent decision of the English government to End all COVID Passports, Mask Mandates, Work Restrictions just two days earlier.

Here are some key highlights from BMJ's Covid-19 vaccines and treatments: we must have raw data, now (emphasis added):

The article begins with the headline:

Data should be fully and immediately available for public scrutiny

Notice that they say "public scrutiny", not limiting themselves to the "medical establishment" only. What this seems to imply or signify is that they have the best interest of the public in mind - which is how it always ought to be.

Next, the article points out some lessons [unlearned] from the past with regards to inadequate planning and gross wastage of resources during a prior pandemic:

In the pages of The BMJ a decade ago, in the middle of a different pandemic, it came to light that governments around the world had spent billions stockpiling antivirals for influenza that had not been shown to reduce the risk of complications, hospital admissions, or death.

The majority of trials that underpinned regulatory approval and government stockpiling of oseltamivir (Tamiflu) were sponsored by the manufacturer; most were unpublished, those that were published were ghostwritten by writers paid by the manufacturer, the people listed as principal authors lacked access to the raw data, and academics who requested access to the data for independent analysis were denied.

In my exposé from two years ago, I had written and warned about these nefarious practices, specifically in Part 4 - Big Pharma as I had a whole section on this; here are a few snippets:

Ghostwriting: More specifically, I am referring to how individuals employed by the pharmaceutical companies and their respective associations design and write journal articles which are then "rubber stamped" and signed by highly reputable doctors and then published in the top medical journals which are then reviewed and taken for gospel by countless physicians across the health care sector.

Writing medical articles by pharmaceutical industry members is a practice known as ghostwriting. Here is a quick definition of the term and practice:

Ghostwriting is one primary method the pharmaceutical industry uses to manipulate the evidence base. This tactic involves misleading the scientific community and the public about who conducted a study. (Source: 1)

The description above comes from an article entitled The Pharmaceutical Industry and the Corruption of the Medical Evidence Base from Medicating Normal - a documentary that exposes such misdoings in the industry. They continue:

In this practice, employees of the pharmaceutical company are tasked with designing a study that will find a positive effect for their drug—a process which can involve several unethical or controversial research methods—and then writing a paper that spins any negative results into a positive finding.

They also note the following troubling characteristics of the practice:

A further problem is that the medical journals, and the peer review process, which are supposed to be the gatekeepers of science, also have serious conflicts of interest. Many of the doctors and researchers who do the peer review are also paid consultants of pharmaceutical companies.

As you can see by the Publication bias method alone, doctors get duped and deceived when they fail to realize that there can be a larger number of studies (unbeknownst to them) that actually reveal adverse effects to the given drug (or treatment) that they prescribe to their patients.

This is practice further corroborated by none other than the British Medical Journal as stated in their (03 October 2018) research study entitled Collaboration between academics and industry in clinical trials: cross sectional study of publications and survey of lead academic authors. Here are some troubling highlights from this article beginning with the Abstract section [Emphasis added in some instances]:

Note that I have left these instances out but you can view them in my original post.

Two years ago when I wrote this, most would have thought that this kind of egregious happenings in the industry were way too far-fetched and merely the fabrication of us so-called "Conspiracy Theorists".

But the facts show, that this has been happening for a very long time and continues to this day as was pointed out in the BMJ's 19 January, 2022 article.

Today, despite the global rollout of covid-19 vaccines and treatments, the anonymised participant level data underlying the trials for these new products remain inaccessible to doctors, researchers, and the public—and are likely to remain that way for years to come. This is morally indefensible for all trials, but especially for those involving major public health interventions.

Among regulators, the US Food and Drug Administration is believed to receive the most raw data but does not proactively release them. After a freedom of information request to the agency for Pfizer’s vaccine data, the FDA offered to release 500 pages a month, a process that would take decades to complete, arguing in court that publicly releasing data was slow owing to the need to first redact sensitive information. This month, however, a judge rejected the FDA’s offer and ordered the data be released at a rate of 55 000 pages a month. The data are to be made available on the requesting organisation’s website (phmpt.org). 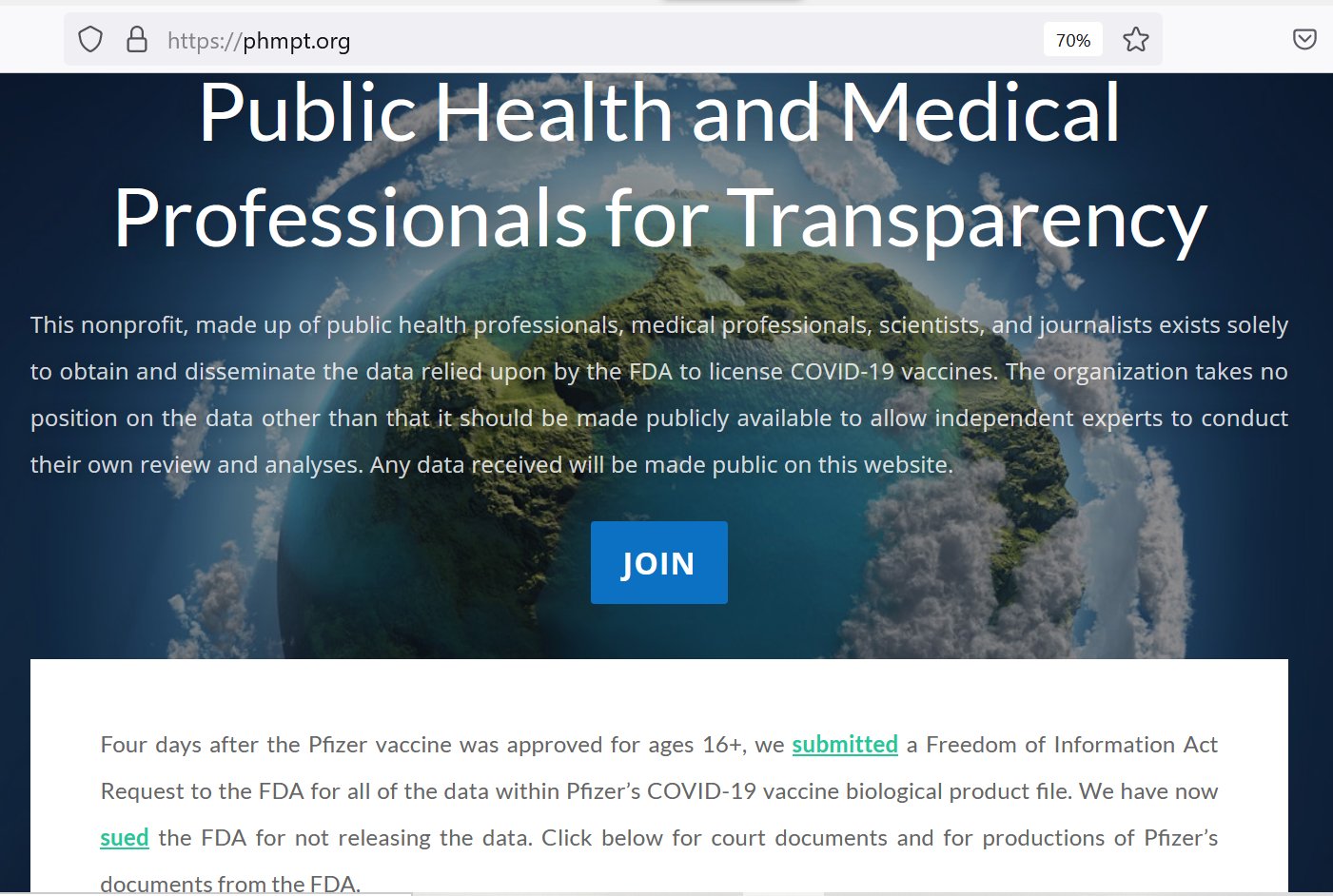 In Part 2 of my exposé, I had also outlined several instances whereby both the CDC (Center for Disease Control) and the FDA (Food and Drug Administration) have regularly been plagued with conflicts of interest; here is but one snippet in the lot:

CONFLICT OF INTEREST: CDC & FDA Committee Members Have Financial Conflict of Interest with Vaccine Pharmaceuticals. A Congressional Government Reform Committee report criticized the FDA and the CDC for routinely allowing scientists with conflicts of interest to serve on two influential advisory committees that make recommendations on vaccine policy. (Sources: 1, 2)

Here we had a US Congressional Committe issue a report specifically criticizing conflicts of interests between the FDA (and also CDC) with vaccine manufacturers. Therefore, there is indeed a proven track record about this abhorrent collusion between the institutions that are suppose to be "watchdogging" public health in the interest of the general and Big Pharma.

...it remains to be seen how the FDA responds to the court order. Moreover, the FDA is producing data only for Pfizer’s vaccine; other manufacturers’ data cannot be requested until the vaccines are approved, which the Moderna and Johnson & Johnson vaccines are not.

Transparency and trust
As well as access to the underlying data, transparent decision making is essential. Regulators and public health bodies could release details such as why vaccine trials were not designed to test efficacy against infection and spread of SARS-CoV-2. Had regulators insisted on this outcome, countries would have learnt sooner about the effect of vaccines on transmission and been able to plan accordingly.

Once again, we have government officials - in this case the regulators and public health bodies - withholding critical information with regards to vaccine efficacy and transmissibility. Sure one could argue that time was of the essence, but at what cost? Withholding information such as that related to adverse effects and deaths associated with the trials was careless and irresponsible to say the least. The data was always there and available, yet access to it remained stonewalled.

Big pharma is the least trusted industry. At least three of the many companies making covid-19 vaccines have past criminal and civil settlements costing them billions of dollars. One pleaded guilty to fraud. Other companies have no pre-covid track record. Now the covid pandemic has minted many new pharma billionaires, and vaccine manufacturers have reported tens of billions in revenue.

One has to wonder how much of those "billions in revenue" were used to bribe or influence officials in those public agencies not just in the UK, but all around the world.

The BMJ supports vaccination policies based on sound evidence. As the global vaccine rollout continues, it cannot be justifiable or in the best interests of patients and the public that we are left to just trust “in the system,” with the distant hope that the underlying data may become available for independent scrutiny at some point in the future. The same applies to treatments for covid-19.

In this passage it ends with "The same applies to treatments for covid-19. We all know how treatments (some using hydroxychloroquine or ivermectin) have been actively repressed by the medical establishment and grandly ostracized by the mainstream media (who notably is also largely funded by Big Pharma).

They also say "with the distant hope that the underlying data may become available for independent scrutiny at some point in the future". Well, thankfully there are such independent outlets that do provide such data in the form of real-time analysis. In fact, there is an entire website (https://ivmmeta.com/) that provides Ivermectin for COVID-19: real-time meta analysis of 76 studies.

While I am no expert in the analysis of such trials, the data does nonetheless seem to indicate very positive results especially in early treatments for ivermectin.

Hopefully, physicians that treat patients with Covid-19 will have a look at these when judging which treatments are feasible for their patients.

Sadly, though, we have all heard of way too many instances whereby hospitals in North America and around the world have punished doctors for using such treatments and threatened those who dare consider them in the treatment of their patients.

Personally, I believe that there will be a huge price to pay (ethically, morally, legally, and financially) for those medical institutions and practitioners who have opted for more dangerous treatments compared to safer ones that were at their disposal. Lawsuits must be piling up by the thousands all around the world.

The article continues and concludes:

Transparency is the key to building trust and an important route to answering people’s legitimate questions about the efficacy and safety of vaccines and treatments and the clinical and public health policies established for their use.

The purpose of regulators is not to dance to the tune of rich global corporations and enrich them further; it is to protect the health of their populations.

We need complete data transparency for all studies, we need it in the public interest, and we need it now.

Let us see what comes of this.