DCITY IS ON THE MOVE, ARE YOU ONBOARD?

If there is a game in the blockchain that is growing under our nose
I have to give it #dcity.
Due to the change implemented the game has becoming more challenged and
players are moving quick to statue their place in the ranking.
Running your city looks easy to the eyes but at the same time you need to find the right business
to balance your city.

It may sound negligible at first to purchase on the market what you need but you need to envision
the repercussion to your popularity, population, education and so forth.
You have five groups of card to look for. First edition was what we use to purchase from BUY MARKET. But now we have first and second edition to get.
The more you play the game the more you will understand how to put them to good use. 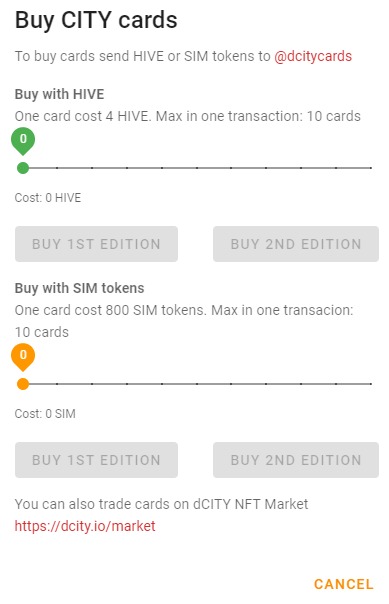 Now the quickest way to amass card is to buy from the system itself. That way the hive spent will go to the reward pool. This pool is growing positively and it sitting at 100k hive right now. It shows more eyes are coming over to be part of the top 200 to earn sim and hive. You can go look for bargain in the market. lately I saw around 2000+ card for sale. It goes up to 3000. The price varies but with the help of discord you can find ways to swap and make friends to trade your cards. This game is very competitive. If you have #hive sitting around doing nothing, come over and invest it on the game. With the right prospective you can make it happen by earning from your city strategy. At least it is another form of curation by adding more #hive to the pool. Everyone benefits from it. Today I am trying the Auction and see if I can earn the bank but the battle is alive and I am checking constantly to raise the price.

In order to run the city taxes have been implemented, my city is at 21%.
It could be the same bracket for all cities right now.
I recalled the price of sim on hive-engine market plays a role on how sim is reward on all cities.
More value, more sim to us all.
If sim is losing value on the market less sim distributed.
Not sure how the president gets the taxes.
When you fully scope the mannerism of any city the number of cards only help with the #hive reward.
IF you have a lot of basic home card and no businesses for the vast population, you get taxed heavily for running this city.
At least you get something for holding a large quantity of cards.
You need to get it right to get the population employed. The unemployment is high in all cities. Some better than others.

The second edition cards are selling a lot. They offer more than the first edition. The first card conditions income, popularity and workers. They are still vitals for any city. At one point they will be classic to make ways for the second edition.
These cards focus on population, creativity, education, plus what the first edition added. I never pay attention to the citizens. They are very limited on what they do but they are part of the ecosystem to keep your city into the positive. There is a price for everything. The same way you get rewarded for everything in your city.
One cool aspect before the second edition card. Garbage dump can turn your popularity negatively if you do not own 25 diverse cards. Just owning just one of each in the second edition will get you through. Popularity is very important on the game and it brings value to your city and positively you get rewarded.

These cards are something else. When you have these cards you have advantage to make your city acting positively.
I did receive one so far. There are many other steps to reach before you can see the benefit of these cards.
Research center is a key card to have first.
Then you need to align the card by row.
Four rows to be exact

This part will be fully adjusted by the time these cards are widespread to all city owners. So far few people get lucky and the system provided them the card. I have a feeling more active you are, more you get to receive the card for your city.

In order to fully understand #dcity you need to immerse yourself and get some good amount of cards.
Get yourself in the top 200 so reward will start coming your way.
I have to mention events that is part of any city. Participation requires you to get involved with other token like #stem, #beer, #ccc and #weed tokens. Hive-engine has a lot to do with #dcity.

#hive is used to purchase directly from buy mode.
You get your daily reward in #hive as well.
You get reward in sim as well.
#sim is the other token in circulation vastly with #swap-hive token.
In general most hive-engine token could be part of the game as long you have an audience to participate.
If you are not great in the writing section and find ways to be part of #hive ecosystem, #dcity could be a good resort to see how simulation city works.
The game is growing, @gerber with his team are working to make sure the game stays interesting.
#discord is where you get the most out of #dcity and the INFO
If you need a link, will get you one by in the comment section.
#hiveisalive

Got to give you the prop on that one.
You helped a lot as well with your post.
It is a way for me to get accustomed more with the game.
Kudos!

Nice post and keep more of em coming about DCity! I want all your friends in the game buying up all my basic homes! :)

Ha ha ha we need more and more players
That way we can build another reward pool
for all city owners.
Kudos!

I am loving the gamw already. I down know why i am not playing it yet ... it sounds like clash of clan

Be on discord to learn more about it
And then just purchase what you need,
Every 2pm ET it is reward time.

Cheers for the informative post! I've been interested in dCity, but I haven't yet had the chance to play it. It looks like a traditional city-building game, like SimCity, but instead of having a 3D overview, you're using cards to manage all the resources, planning, building, and management right?