rhondak in #animation • 8 months ago (edited) It seems like another lifetime now, but years ago I played The Sims 2. It started with PlayStation, then I learned that brothers and sisters could get married in that game because the PS2 version that was current back then did not recognize family relationships. Freaked out a little, I searched the Internet and discovered that in the computer version of the game, not only did brother and sister know they were brother and sister, but both male and female Sims could get pregnant—even if the males had to get knocked up by an alien. So I graduated to the PC version and fell headfirst down the rabbit hole.

It wasn’t long before I stumbled upon Sims 2 machinima on YouTube and decided I just had to make some of that myself. For those who don’t know, machinima is cinematic production made within a game engine. Most machinima comes from other games like WoW, but make no mistake; the Sims 2 machinima community was active. I learned to hack my game and used so much custom content and mods that some truly bizarre things began to happen. Here’s a screenshot of a blog post I made about this back in the day. I still laugh every time I look at it. 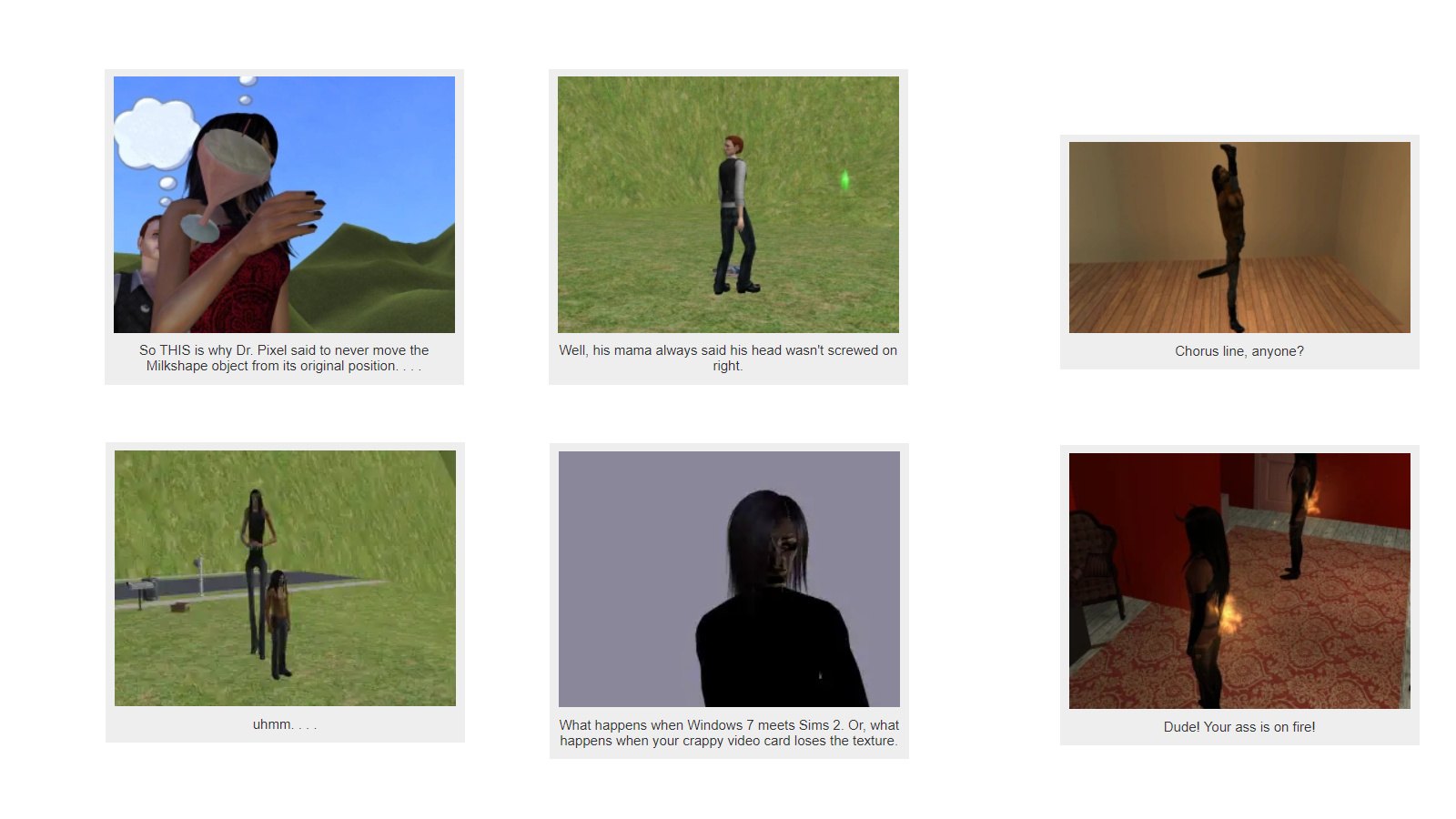 Predictably, several software companies rose to the challenge of creating-path based animation platforms that were free from the EULA agreements of traditional game makers. This way, machinima could be used for commercial purposes. I began to see Reallusion’s iClone characters in TV commercials and Moviestorm started taking over YouTube. Daz and Poser stepped up as well, and soon characters created in those platforms found their way into machinima productions, thanks to special bridge plugins that allowed them to be rigged and animated in some sort of standard way. I learned about bone assignments, how to use 3DS Max, and before long I was making custom content—including book trailers--not only for my Sims 2 game, but for iClone machinima as well.

Then, in 2013, my Asus laptop crashed. It was practically Alienware, a very high-end gaming laptop capable of running the programs needed to create path-based animation. I had no means of replacing it. A project I’d been working on that used professional voice actors and some very cutting-edge technology languished in incompletion. I slowly withdrew from the machinima community because I had no way to keep up. In 2017, when the legacy chain we all love to hate went to the moon, I cashed out enough to buy a new Asus, a much faster and better machine than the old one. But alas, technology had leapfrogged so far ahead of me that even that laptop was incapable of rendering anything produced for photorealism, which had become the trend. So I gave up again, and while I was locked in Morocco during the pandemic, that laptop died on me, too. I guess it was offended that I only used it for blogging.

While I paid no attention, distracted by real life, the Unity empire was hard at work on a revolutionary new concept: cloud-based applications for creating utterly photorealistic 3D characters that could be animated and used not only in their game engine, but exported into every other major platform as well. They developed their own version of iRay-type lighting that far surpassed anything seen from other platforms. The best part of it? Because the applications are driven from their own server base, ultra-high-end hardware is not required by the user. And the next best part? Access to these applications is completely free.

Well, you know me. I dove right in. And within a day, I had assembled the main characters of my first two novels, Talking to Luke and Wingspan. A few more days, and I had created almost the entire cast of High Kill. Unlike past efforts with Daz, the characters in the following screenshots are already fully rigged and animated, and believe me… at a glance, it’s impossible even for me to tell they’re not real humans when they move. 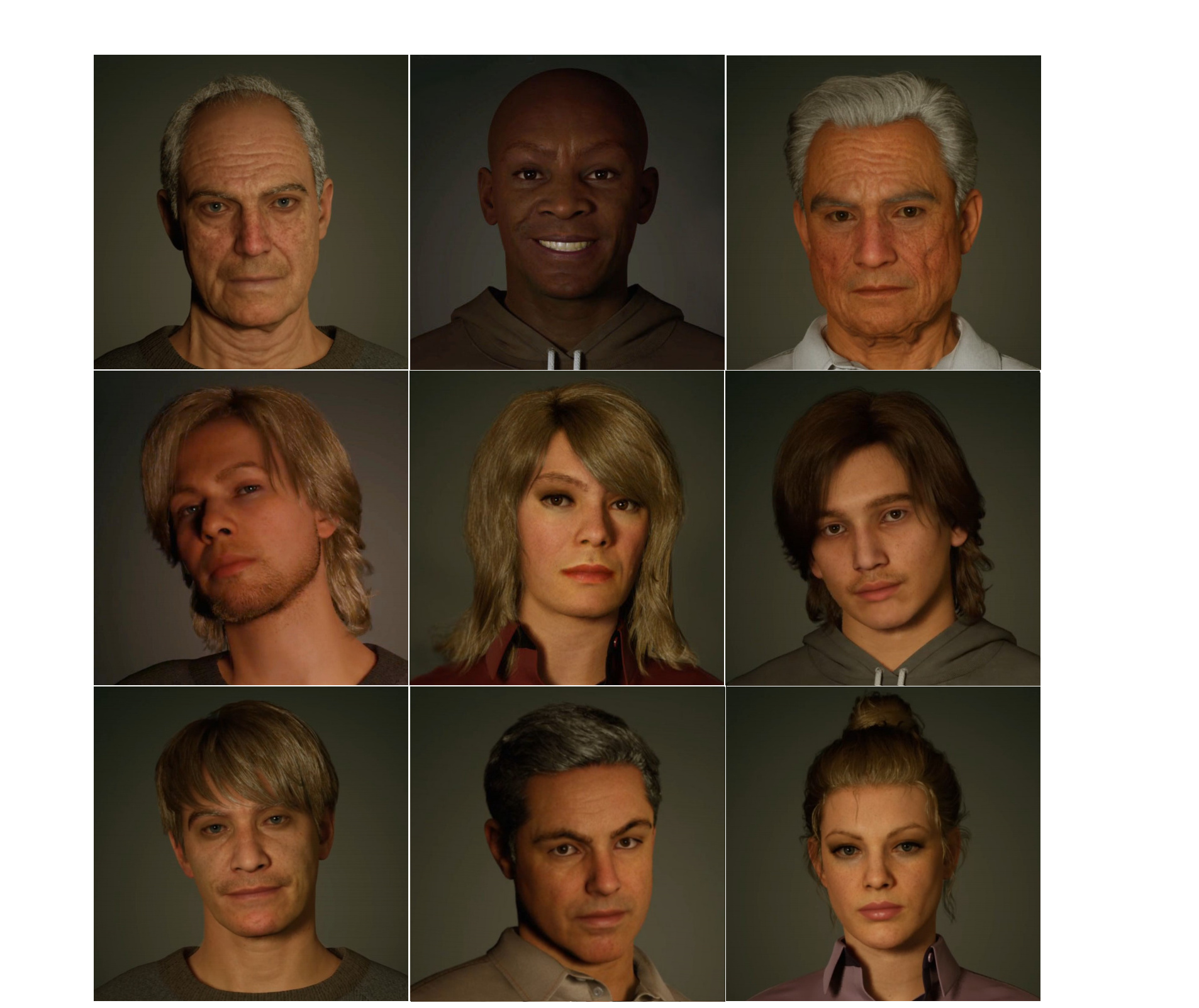 Marketing is the first thing that comes to my mind. Already, on my Facebook page, a lively discussion has taken place about the High Kill crew, since everyone sees them differently inside their mind’s eye. Debate rages in the literary world about how much we should describe our characters, since the reader’s imagination is the best sketch pad. However, for me, it’s the consumer engagement that motivates me to publish these images. I don’t care how others see my characters in their own heads. What I love is the conversation these images can inspire. It’s engaging and entertaining and makes other people interested in reading my books. What more could I ask for?

I do have the thought in mind of making the jump from iClone to Unity and animating these characters myself. The learning curve is steep. It’s highly technical. I’ve fallen way behind in the near decade that I’ve been away from the CC and mod universe. But I still remember the basics. I understand bone assignments. I’m familiar with path-based physics. I can mesh. I can work with textures and alpha channels. Why let all those years of skill development go to waste? My brain hasn’t completely rotted. I think it can still dust itself off and get back on point.

At the bottom of this post, I will link to a video made by an incredibly gifted filmmaker using the Unity platform and their Metahuman characters. It’s the second installment of a series, and you will probably want to find the first episode and prequel after you see this one. They’re all quite good. I have no idea how he did this with the Metahuman project still in beta. The characters in Metahuman’s Creator application have twenty-two hairstyles between both genders, three types of shirts, three types of pants, and about the same number of shoe choices. They run on stock animation that is identical for each of them. “Xanadu” extracted stock characters from the Metahuman project, modified them—one heavily, and one almost not at all—and created a mind-blowing YouTube series that looks as slick as a professional production. And get this: he is the ONLY person working on it. One guy, one studio, all of this action. It’s downright incredible.

I have no idea which character he modified to make “Blu.” But I can tell you with almost near 100% certainty that the “normal” human character is “Chandra,” from the Metahuman character panel. Looks like Xanadu removed the beard and moustache and turned one eye blue, and enlarged the iris. Everything else is completely stock, right out of the package. Except the clothes. No clue how he did that either, but I’m going to find out. 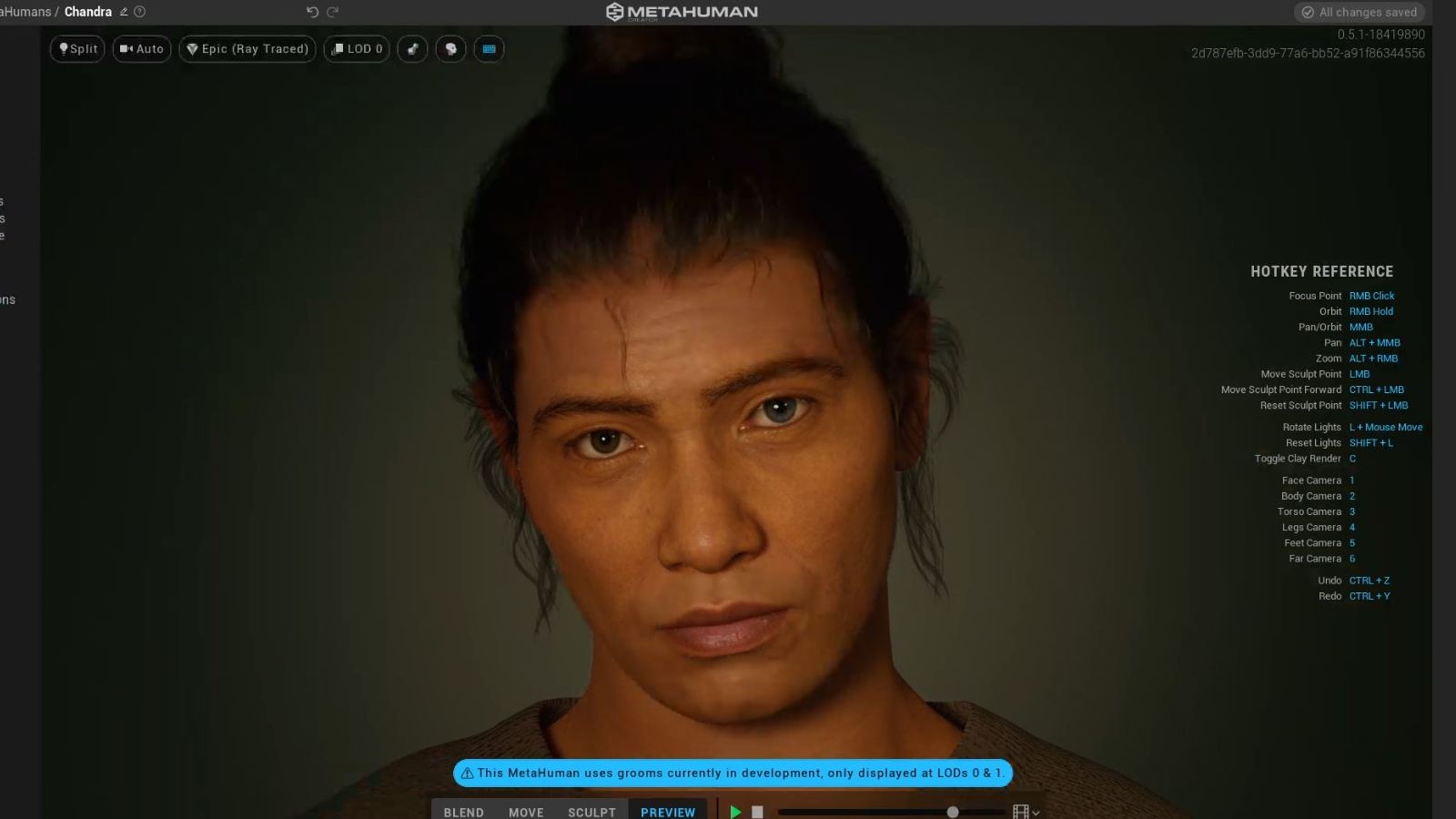 The level of detail in these Metahuman characters is astonishing. The artists who designed them have achieved photorealism on almost every level. There are some known issues with lip synching, but there’s also an independent coder working on a plug-in to fix the parameter settings that cause them. We’ll see what he comes up with. In certain lighting, it’s fairly obvious that the characters are CG. In other lighting, I have to study the screen hard to know for sure. The characters seem that real. 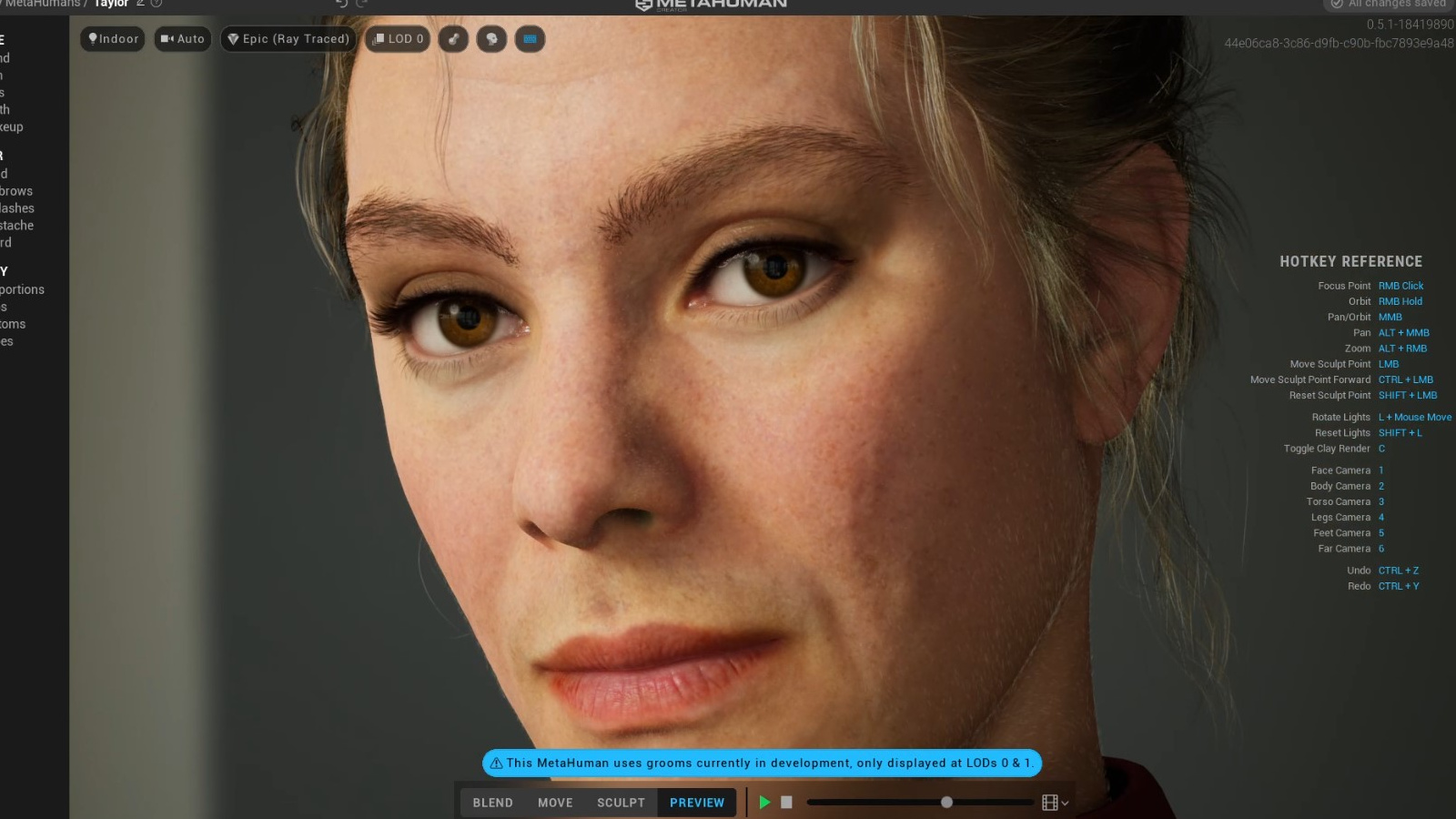 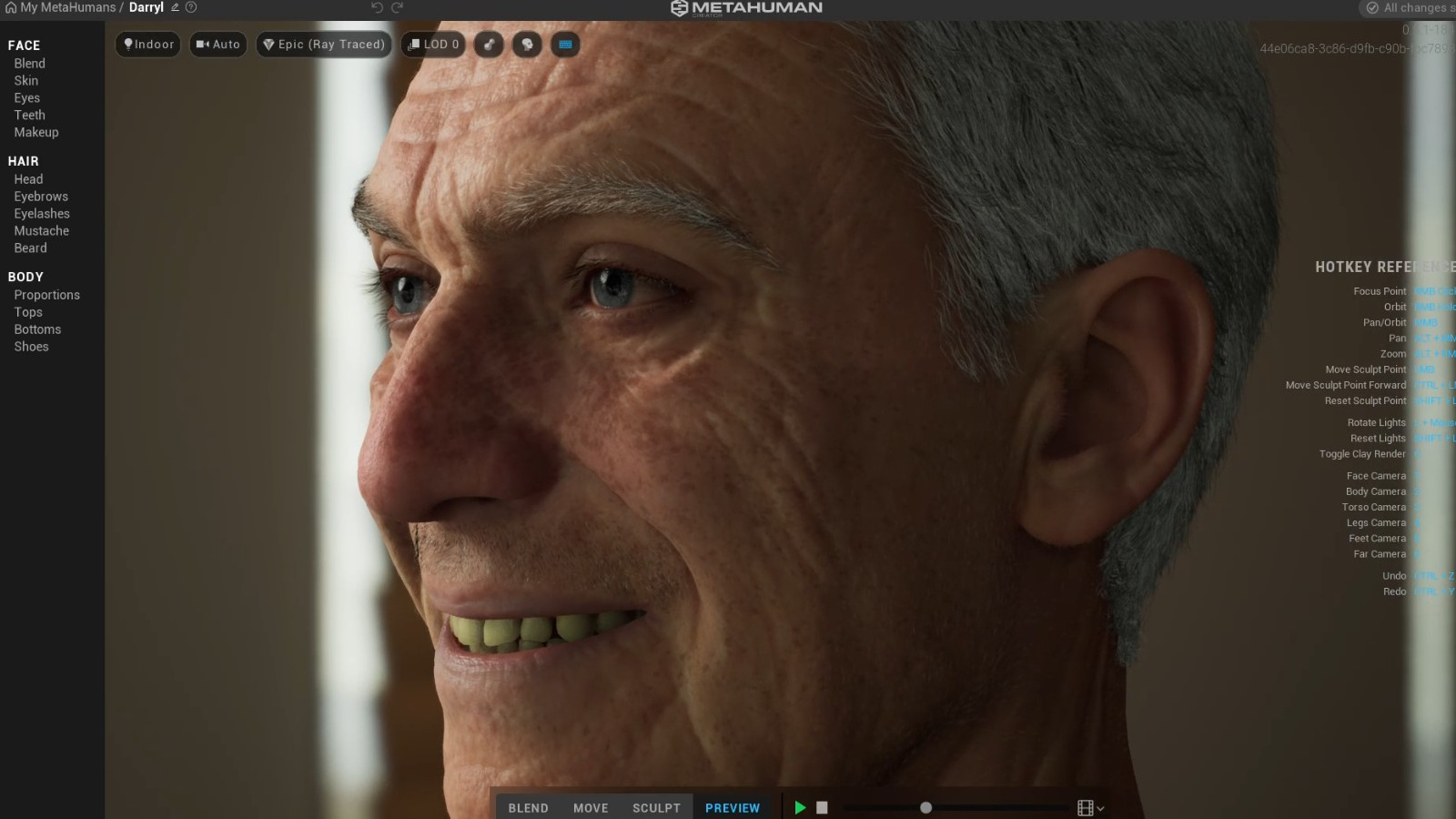 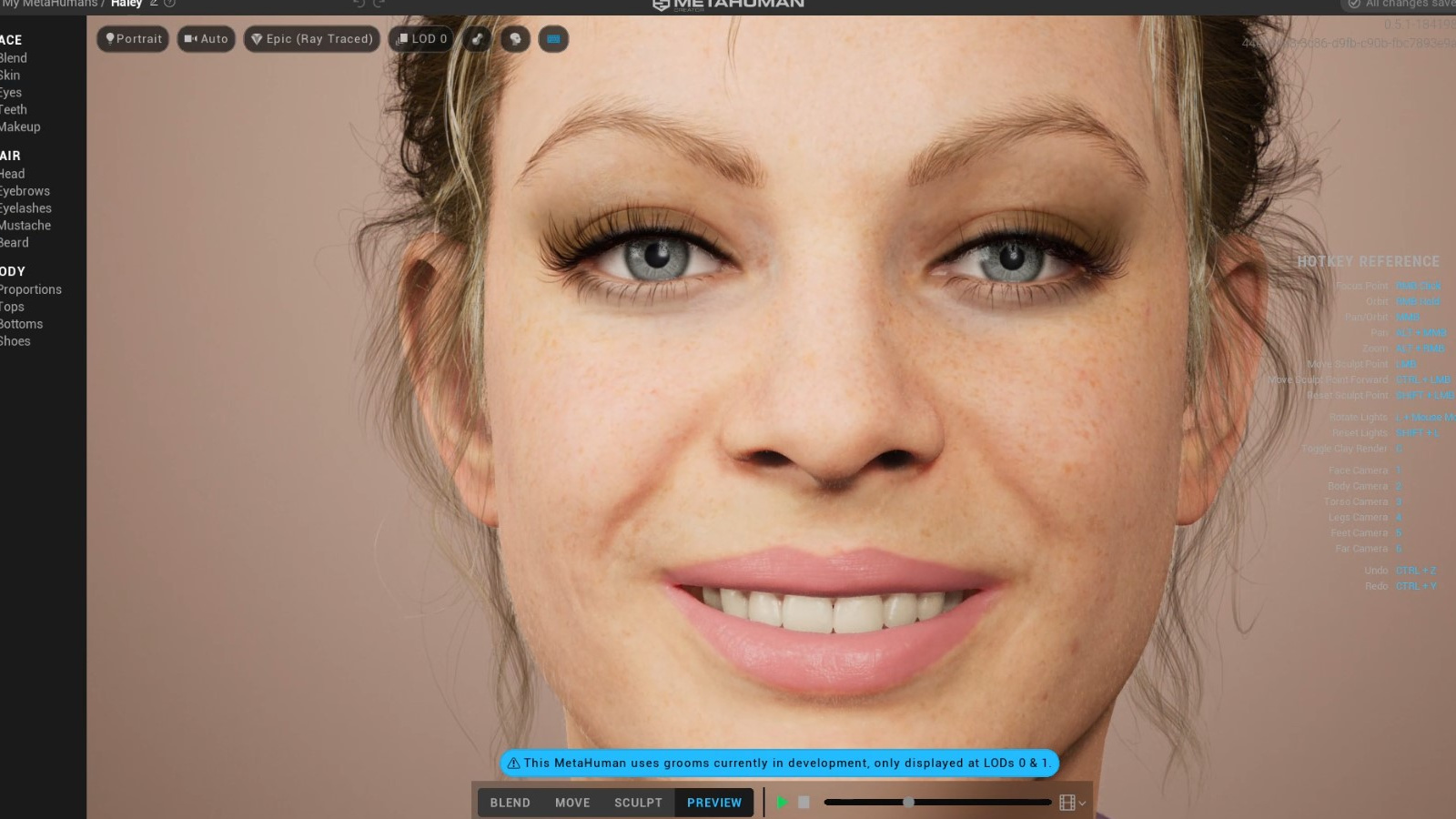 For me, the significance of this new technology is that the barrier has been lowered between me and high-end marketing strategy for my novels. I’ve anticipated this for years, this leap out of the uncanny valley and into the world of true photorealism. It’s still an emerging universe, so stay tuned. Right now, I’m going to go download The Sims 4 onto my new desktop computer. It has entered my head to play a household or two. And who knows—I may end up cranking out some TS4 machinima for old times sake. Wouldn’t that be a hoot?

Stay safe out there!

P.S. Watch the following video all the way to the end, and you can see some side-by-side shots of Xanadu actually creating the animations, facial Live Link included. As well as a side-by-side comparison of Blu as some other type of 3D character (Daz or iClone, maybe?) and then with a Metahuman rig and texture. The difference is impressive.

this is amazing looking tech! Seriously. this is why they talk about DeepFake video now. For the average person, one cannot tell the fakes from the realistic.

Bluefin, I have to admit...there's a little concern about some of the ways this tech will be used in the future. Right now I have marketing ideas when it comes to novels and such, but I'll have to stay vigilant about what lines I think should not be crossed with this stuff.

Exactly right, the tech is amazing and in itself, it is NOT bad.
It all comes down to who is using it and what are THEIR morals!

How far the tech has come in only ten years - beyond astonishing!
You just need to stay out of the hospital (and raise money for the computer/software), and you can do anything--your filmmaking skills are brilliant.

The learning curve is steep. It’s highly technical. I’ve fallen way behind in the near decade that I’ve been away from the CC and mod universe. But I still remember the basics. I understand bone assignments. I’m familiar with path-based physics. I can mesh. I can work with textures and alpha channels. Why let all those years of skill development go to waste? My brain hasn’t completely rotted. I think it can still dust itself off and get back on point.

You're still amazing! No atrophy of the brain here!

Thank you for the kind words, Carol. Yep, I definitely wish I had the money for high end hardware. Maybe if I keep dreaming and hoping hard enough....