Some considerations on the use of neem for tick control.

amestyj in #agriculture • 2 months ago
Dear readers, in the production of cattle, ticks Rhipicephalus microplus is one of the factors that most affect the livestock sector, knowing that these ectoparasites are capable of producing anemia, transmitting diseases among other damages that cause irreparable losses for the producer. This is why it is necessary to apply alternative methods that help control and reduce the incidence of external parasites, and in turn avoid the occurrence of resistance to many chemicals that are constantly used as insecticides and acaricides, compromising animal welfare, environmental, and the degree of toxicity to humans, not to mention their high costs and shortage of many of them. 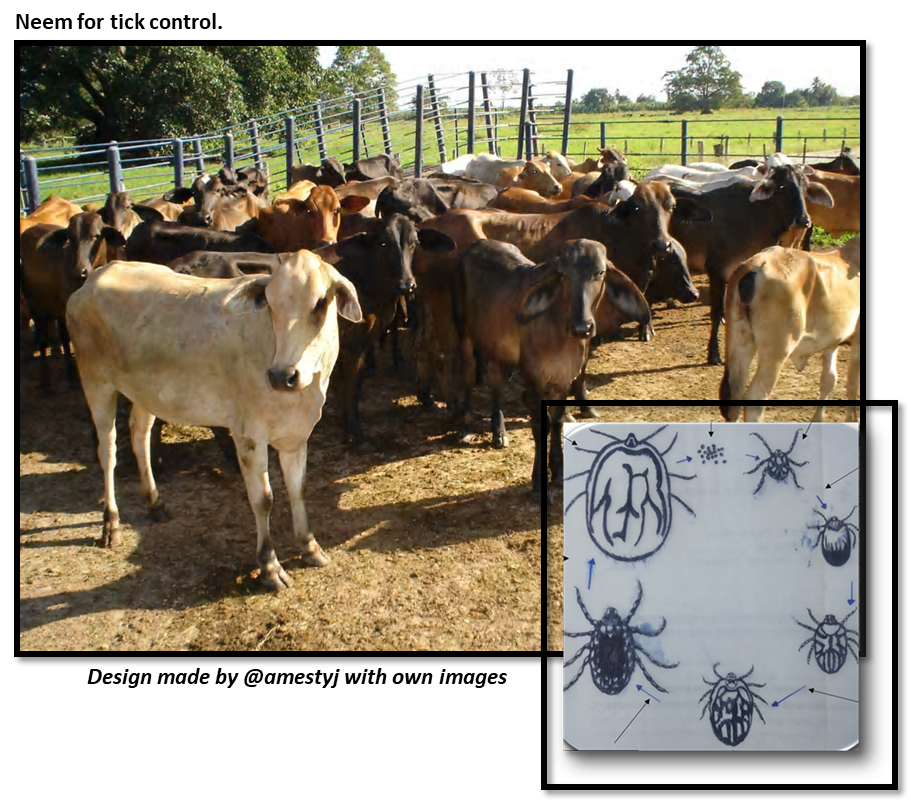 In the same sense, it can be said that, at a global level, in the tropical and subtropical regions, the main threat facing cattle farming is the massive attack of ectoparasites, especially ticks and parasites that on a large scale produce irreparable damage that eventually cause death to the animal. Tick bites according to Anderson y Magnarelli, (2008), in addition to being annoying and painful, can cause lameness, hair loss, as well as becoming a gateway for secondary bacterial infections, these infections can damage the animal's skin and at the same time attract other ectoparasites such as flies and their larvae, bringing as a consequence economic losses to the producer, because it affects weight gain, decreased milk production, this without taking into account the stress it causes to the animal.


The control of ticks has been based mainly on the continuous use of chemical products; mainly imported and away from the producer's hand due to the high cost of the different products, among these we can mention the use of Ivermectin, Cypermethrin, Amitraz. However, the frequent and inappropriate use in tick control reflects a greater number of applications, higher costs to the producer resulting in insect resistance, environmental pollution, toxicity to beneficial organisms such as decomposers of bovine manure that enhances the recycling of nutrients in agroecosystems.
It is for this reason that new alternatives are currently being sought for the control of ectoparasites, but at the same time that they do not cause harm to the environment, animal and human beings., one of this is the use of botanical pesticides with insecticidal effect for various agricultural pests, among the plants that have this potential is the neem whose scientific name is Azadirachta indica, with which extracts obtained from the seeds, leaves and bark of the aforementioned tree can be made, it is not toxic to man or animals, it is biodegradable and does not produce resistance. According to Berenguer et al. (2013), it has biologically active constituents with recognized effects on ticks and other insects since, they interrupt or inhibit the development of eggs and larvae, repels and poisons larvae, adults and inhibits females to oviposit, causing a disorder in their system. The properties of neem are based on its components with real hormones, which, according to Ramos (1999), affect about 300 species of arthropods in such a way that the insect bodies absorb the components of neem as if they were real hormones and these block their endocrine system, causing behavioral alterations, leaving the insects so confused in their body and brain, that they cannot reproduce and their populations are greatly reduced.Products made from neem are not toxic to humans and Pathak, Mathur, Latha, John ( 2004), pointed out that it contains 30 insecticidal metabolites; of these, the most important is azadiractin (AZA), which is recognized as the main active compound with the greatest bioactivity against insects.
Dear readers, the use of neem in veterinary medicine has been applied in various latitudes such as in India that make various Neem preparations that have been standardized in the form of oils, powders and liquids. In the southern area of Lake Maracaibo, some trials have been carried out with this type of products, the results of which will be shared with you in future publications. Wow neem for ticks bever thought about it
!1UP

See you later, have a great week!