Some considerations on food supplementation in cattle

amestyj in #agriculture • 13 days ago (edited)
Dear readers, in previous articles we described a possible alternative for the supplementation of ruminant animals, because food in tropical ecosystems is usually based on the consumption of pastures, which as we have commented before is the most economical way to feed these animal species. However, it must be made clear that when pastures are not managed efficiently, their quality decreases and they do not cover the nutritional requirements necessary for production. Under these circumstances, supplementation, as expressed by Araque (2006), may be a convenient practice, particularly when it enhances the efficiency of the use of forages or corrects deficient conditions of some nutrients. 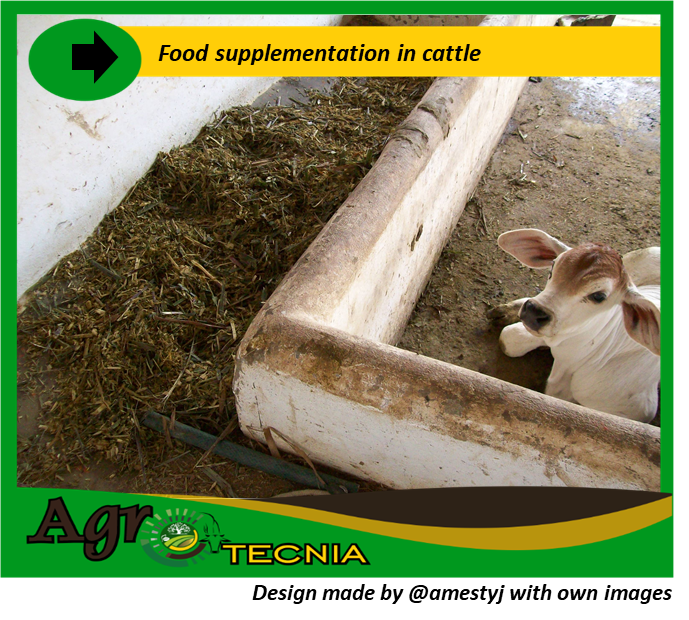 In the same sense, Preston and Leng (1990), considered it necessary to establish priorities based on the existing nutritional limitations, especially when the forage supply is of very poor quality, highlighting the need for adequate supplementation for a ruminal function in harmonic balance for the degradation of fibrous foods and the supply of nutrients and energy for the animal. This means that nutritional elements such as protein and carbohydrates must be provided so that the microbial flora of the rumen (compartment of the ruminant stomach) is activated and performs the fiber degradation processes among others.
In consideration of the above, Bargo et al., (2003), mention that livestock systems with low quality pastures and supplementation pursues the following objectives:
In the southern zone of Lake Maracaibo Venezuela, specifically in some production units of the Colón Municipality, producers use concentrated feed as a supplement, but others use only in the feeding programs of their herd, resources such as molasses and salt, although supplementation allows to correct unbalanced diets, the use of these products does not ensure that they can cover the requirements of the animals, in addition to this, some producers do not know the nutritional deficiencies of their pastures and consequently do not use adequate food resources. Regarding the use of supplementation, some researchers, such as Manterola (2004), describe some related terms among the main relationships that we can find between what pasture potentially offers and supplements, which will be described below:
Dear readers, we make a basic description about what is considered a supplement, taking into account that it is a technique widely used in regions of the tropics as mentioned above, in our geographical area livestock production systems are dual purpose, that is, they are mongrel cattle which is used for the production of milk and meat, depending on the type of animal may have a tendency to produce more milk than meat or vice versa. The technology implemented in some of the production units in the area are not efficient enough for cattle exploitation considering that the pastures are not managed efficiently and therefore the implementation of alternatives that serve to nutritionally supplement their animals is required.
#ivestock #food #supplementation #stemsocial #stem #neoxian
13 days ago in #agriculture by amestyj
100%
-100%

Is it very expensive this type of supplement?
!1UP

Hello dear @gwajnberg, mention concentrated foods because it is the one used by some producers in the area, but they are the most expensive because they are industrialized foods, they provide adequate amount of protein but do not provide fiber, it can be supplied to the animal, but these animals must also consume pastures to receive adequate levels of fiber.

So long, have a great weekend.