amestyj in #agriculture • 4 months ago (edited)
Dear readers, some time ago we mentioned in one of our articles an insect pest of the most harmful in agriculture and that is considered by the Food and Agriculture Organization of the United Nations (FAO), as a pest that threatens food security, because it can destroy corn plantations quickly if not controlled in time. Its scientific name is Spodoptera frugiperda and commonly known as the corn fall armyworm or grass sweeper, since, when it is in its larval phase they feed on the central leaves and in the growing regions of the corn, in the same way in grassland ecosystems they can reach high populations within the paddock and destroy it or sweep it quickly consuming all its foliage leaving only the central rib of the leaves. 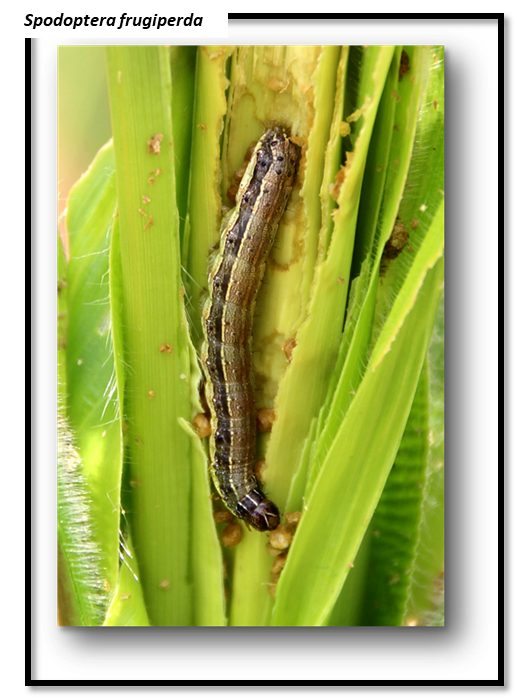 Design made by @amestyj with public domain image taken from Flickr
The insect causes the aforementioned damage because it has a chewing mouth apparatus causing a chopping effect on the leaves of plants and can cause numerous losses in various crops when the rainy period begins in tropical areas, slightly decreasing its attack when the rains are prolonged and intense, among the susceptible grass species are those of the genus Pennisetum, the tanner (Brachiaria arrecta), the Páez (Brachiaria mutica), in addition to Cynodon spp and Digitaria spp and those that show a certain resistance is the maximum Megathyrsus guinea. The attacks on crops are usually carried out during the day or at night, once the paddock is defoliated, they move to another in search of plant material. In the case of corn, apart from defoliating its leaves, the larvae of greater development penetrate the most tender parts of the plant (growth point “bud”) and penetrate the cobs causing damage to the grains.
In consideration of the aforementioned, in order to keep said pest at bay, there are different control methods, among which is the preventive one using entomopathogenic bacteria such as Bacillus thuringiensis wettable powder applying it when the period of greatest incidence of the insect approaches and when there is the presence of small larvae, the mixture is sprayed evenly over the entire foliage, preferably in the morning or in the late afternoon. Design made by @amestyj with public domain image taken from Wikimedia Commons
In relation to the biological control of this insect, an excellent news has emerged about the patent of a bioinsecticide generated by scientists from the National Autonomous University of Mexico, the researchers pointed out according to the web portal agroalimentando.com that it is a biodegradable product that does not cause imbalance in ecosystems, being able to catalog it as an ecological alternative that is governed under the criteria of environmental preservation and respect for natural processes.
To obtain the product of which the scientists are talking about, they worked with the aforementioned entomopathogenic bacterium Bacillus thuringiensis, they mention that said bacterium synthesizes toxic proteins for insects, but according to their appreciations they are not powerful enough. As part of their methodology, they studied how the toxins of this bacterium interact with the insect membranes and in this way understand how the insect eradicates and from there be able to generate a new strategy to improve the mechanism of action.
From the aforementioned, the researchers managed to develop new variants of the toxins, which according to them are more effective, since the worm can be exterminated because the toxicity increases up to 100 times more. The product was made based on the protein of Bacillus thuringiensis and the mechanism of action begins when the insect consumes said protein and it binds to the cells of the intestine to destroy them causing holes in the intestine.
Dear readers, from agrotecnia we value this type of alternatives that are being developed as long as they are friendly to ecosystems; as we have always mentioned within the universities is the development of nations, this time we are in front of a product that can more efficiently control one of the most feared pests worldwide for its severe attacks on the cultivation of corn, which is an essential raw material for human nutrition. the researchers pointed out according to the web portal agroalimentando.com that it is a biodegradable product that does not cause imbalance in ecosystems

This is really a great news, as this means that there won't be any long-term consequence on the area. Are we however sure about it? How long does the bacteria considered take to decay?

Thanks in advance for clarifying! Cheers!

Greetings dear @lemouth, thank you for your valuable question, currently the use of biological products based on entomopathogenic bacteria, is a preventive method what is sought is that the bacteria are ingested by the insect so that then inside they release toxins and penetrate the cells of the intestine as mentioned in the article, But what you mention is important because according to the publication they will try to develop transgenic crops that is to manipulate the plants to inoculate the toxins extracted from the bacteria, in that sense, I do not consider it good that plants are genetically modified, because although some specialists mention that it does not cause harm to humans, we do not know what reaction can be had at the time of being manipulated.

The opposite case is the application of bacteria that carry out their natural processes when in contact with the insect without interfering directly with the crop.

Thanks for these insights! I agree that it is better not to touch crops, if possible, because things get turn out of control (I guess there are examples).

Crops with genetic manipulation have registered certain affectations on human health, they have generated plants such as corn that are resistant to herbicides such as glyphosate, because it is a product that affects any type of plant and to be able to control other unwanted plants, they generated transgenic crops of corn resistant to that herbicide.

This is definitely in what I am interested. Do you have specific examples?

Hello friend @lemouth the transgenic corn crop created by the monsanto company some researchers from france managed to corroborate with some studies generated by the same company that they can cause toxicity in organs such as liver and kidneys.

Ah that one. Yeah I forgot about it although I heard about it. That's right. Thanks for the reminder!

bacterias are awesome biopesticides ! I am hoping to see more usage of them!
!1UP

Hi @gwajnberg, entomopathogenic bacteria and fungi have been widely used today for the control of insect pests. but in a preventive way, when there is a high infestation, the pest may not be completely controlled.

Thank you for always keeping me informed, greetings!